A little note before today’s update for our mums, Helen and Myrna. Sorry we missed mothers day yesterday – we can’t wait to see you when we get home and we will make sure to take you out for the mother’s day lunch (or dinner!) you deserve.  We love you! Thanks for being the most wonderful mothers we could possibly have.  Without you, we wouldn’t be the people we are today.

This morning started off with a breakfast at the hotel before meeting the rest of the group.  We had had to pre-select our meals yesterday and Nick and I both chose the traditional Japanese breakfast, consisting of a salmon fillet, fried egg, rice, miso, salad and pickled vegetables. 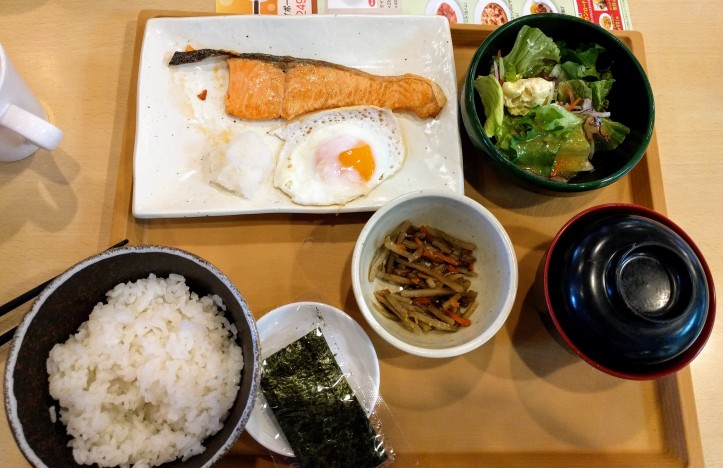 I made an unfortunate mistake with the coffee machine which resulted in cold coffee for me, but it was fine anyway, it was a hot morning and I didn’t regret the unintentional choice!

At 9am, we met the group and made our way on our walking tour of Asakusa.  Rika, our guide, pointed out the best restaurants near the hotel and then led us to the Sensoji, an ancient Buddhist temple located in Asakusa.  It is Tokyo’s oldest temple and has been rebuilt  twice.  First, it was destroyed in a major earthquake and then it burned down in the Tokyo fires during the war.  Amusingly, the plaque at the bottom of the 700kg red lantern said “Panasonic” in kanji.  This is because the founder of the company Panasonic was ill and come to the shrine to pray.  He became better after a time and so, in gratitude, he donated the lantern to the Shrine. Nothing like free advertising to make a man feel better I guess.

The temple is (in)famous for giving out bad fortunes to temple-goers.  In the spirit of immersing ourselves in the culture, I got my fortune read.  To get your fortune, you deposit an offering (approx $1AUD) and shake up a metal container which contains numbered sticks.  You then invert the container and a single stick is dispensed.  Match the number of your stick to the same number on a series of little drawers, and inside the drawer is your fortune.  Handily, the fortunes had English translations on the back.

I pulled number 66 and, predictably, it was a bad fortune. The fortune told me that I shouldn’t enter into any kind of marriage or go on any trips. Hmmm.  This was definitely bad news for me.  Fortunately, Rika told me how to get rid of this bad luck and it was as easy as folding the fortune up and tying it to some nearby lines which allowed me to “leave the fortune” at the shrine. No problems.  We dispelled that bad juju hopefully before it had a chance to stick!!

We were able to wander around the temple area for a while and explore the various stalls and events.  We saw some adorable children toting along a tiny mikoshi and ate some manju (a rice flour dessert that was custard filled with a strawberry on top) before meeting the group again under the red lantern at the shrine entrance.

Burning incense to heal your ills! 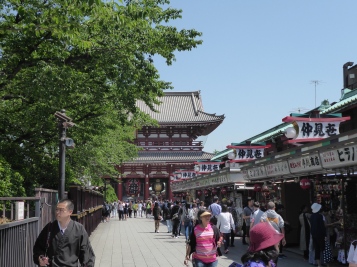 Once we re-grouped, we made our way on to the Soba School which was located near Keisei-tateishi station. This was a really fun experience and really appealed to me as we learned how to make soba the traditional Japanese way.

It was quite a complex process, which I will recap here quickly for you.  I’ll note our teacher was HILARIOUS and imitated bear noises and threw paper stars at us during the demonstration amongst other things.

…So lets just say soba won’t be on the menu at home any time soon.  But it sure was fun!  Here are some pictures of us making this tricky dish: 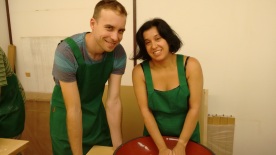 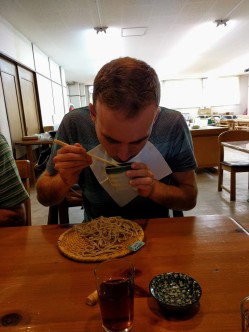 Happily, though ours looked a little more like fettuccine when it was supposed to look like angel hair pasta, it still tasted lovely. It was also a lot finer then others that were made so we felt pretty chuffed!  It was served cold with a dipping sauce which had green onions and wasabi added to taste.  After the meal, the teacher teased us Australians by saying he ate koala regularly and had some in the kitchen.  When he bought it out, it was adorable koala shaped biscuits with chocolate filling.  He also gave us some jumbo puffed corn (not popcorn, this was something else) which Nick is now obsessed with.

The teacher also gave us some 5 yen coins with ribbon tied through the holes in them. As Rika explained to us the five yen coin is lucky is because it’s called a “go-EN” coin. The number 5 is “go” in Japanese, and “yen” is pronounced more like “en”. “Go-EN” means “honorably good luck” especially in terms of relationships. People also throw in these coins at a temple hoping to meet new people who might bring fortune, business, friendship or love.

After this, the group had free time so Nick and I briefly stopped back at the hotel before heading out again to Ueno. In Ueno, we did some shopping and bought a few presents for my nieces and nephews back home from this amazing 5 level toy shop.  They had some pretty next level tech here and I could have gone crazy if Nick wasn’t there to reel me back in ha ha.

With shopping in hand, we took a stroll around the neon lit neighbourhoods before we headed off for a cheap and cheerful dinner of Japanese curry from Curry House Coco Ichibanya Tobu Asakusa – a chapter of the largest curry chain store in the world apparently.  We only spent $20AUD for both of us to have a curry meal and a shared salad so they are doing the price right.  Japanese curry can’t compare to Sri Lankan curry (I love you mum!) but this was a pretty good meal still.

Sated once again, we headed off for a quick drink at the bar of the Gate Hotel in Asakusa. This was located on the 13th floor and afforded a little bit of a quiet and romantic drink for Nick and I before we headed back to the hotel to turn in for the night.  We were also able to see Sensoji and the Tokyo Skytower so it was a lovely view.

If you’re with me so far reader, I just want to note here that it might be a few days between updates as we are headed to Takayama tomorrow. We will be staying at a local Ryokan.  We are not sure what the WiFi will be like, but just in case it is, as we expect, non-existent, I will update this blog as soon as we have a stable connection again.

The next update will be full of exciting tales such as what its like to ride on the Shinkansen at 320km/hour and what public naked bathing is like.  Stay tuned!