This morning was our last at the Sunroute Hotel Asakusa.

Nick and I had dillegently packed up all our gear the night before so we woke up at 6:45am to meet the group at 7:30am in the lobby for the morning tour activities.

As our last organised visit in Tokyo, we would be visiting the Tsukiji Fish Market which is the largest wholesale fish market in the world.

Before our intrepid group went to explore the hustle and bustle of the fishmonger stalls, we stopped for a fresh sushi breakfast at Sushi Zanmai which used fish caught fresh that morning to create a stunning sushi platter for us to demolish.

This was also the first restaurant which required us to take off our shoes before we dined.  After watching everyone (Nick included) bend over and fiddle with their shoelaces, my footwear choices of plain black sketchers seemed a lot more sensible (but undoubtedly, still a lot less fashionable).

The standout dish for me at breakfast was the salmon roe sushi.  Nick loved the sushi which had a strip of tuna.  Breakfast was also served with a seaweed miso soup and a cup of green tea.  Interestingly, there was no wasabi to be seen though I could taste it in a few of the sushi maki rolls.  The only dish I didn’t like was the herring roe sushi.  It looked like a strip of yellow leather and had a crunch to it which reminded me of sea-cucumber. The taste of it was also slightly bitter, so I didn’t appreciate it.

After a leisurely lunch and much taking amongst the group we left the restaurant to explore the Tsukiji fish markets proper.  The place itself looked like a standard dockwork set up but the pace was absolutely frantic.  Everywhere there were people on forklifts zipping around.  Loading and unloading of fish.  Fish blood and huge chunks of ice.  It was absolutely mad.

Lots of fish on sale 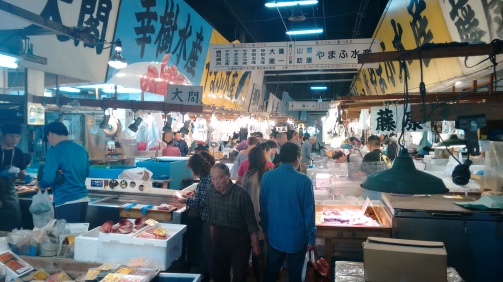 technically, we were not supposed to be in that area as tour groups aren’t allowed but Rika did a bit of sweet talking to the security guard who allowed us in on the proviso that we split into smaller groups which we did…. Until we were inside and then we sneakily reformed up.

Amongst the sights we saw were Fugu (Japanese puffer fish), eels, squid, massive tuna heads, the rest of their bodies all cut up and sold and a myriad of different fish.  Nick said it reminded him strongly of something he would expect to see in south-east Asia rather than Japan.  It was incredibly different and there was so much going on at once.  A real sensory overload.  However, the time we were there was when they were just finishing up and cleaning up so it would have been several times more hectic earlier!!!

One activity you can opt to do is to go and see the famous tuna auctions at the market place. However, the viewing is only open to 120 people so to ensure you get a place you must line up from 2am for a ticket and then remain there for 5 hours (in a waiting area apparently) until the auctions begin.  No one from our group was super keen for that early a start so we missed this.

After seeing the marketplace in action, the group left the Tsukiji area and headed back to the hotel to check out.

We then travelled to Tokyo metro station with our luggage to catch the Shinkansen (Bullet train) to Takayama.  Nick and I were super grateful to be light travellers at this point as we watched most of the other members of the group struggle with their bags. June however, our oldest tourist at 74 years of age, was even better than either of us with her entire luggage fitting in a single bag which weighed 5.5kg. Very impressive.

Once at Tokyo metro, we purchased bento boxes to eat on the journey.  We then made our way to platform 16 which is where our Shinkansen would be departing from.

Happily, we had reserved seats on the Shinkansen, Nick and I were sitting in carriage 16, seats 1D and 1E. This was another moment when we were happy to travel light as you were required to fit your gear in the overhead racks.  Our fellow tourists had to put some of their luggage in the racks opposite us which was a problem when other travellers got on at the next station.  The stationmaster had to find a location on the next carriage for their stuff.  You only have very short stops at stations, so you would want to know far enough in advance when your station was coming up so that you could go and get your stuff and get off!

The Shinkansen itself is very clean and orderly.  The seats are comfortable enough and there was plenty of leg room for Nick.  Watching the countryside change as we have travelled along has been so interesting and lovely.  I was sad to leave the metropolis of Tokyo, but watching the land give way to smaller towns and actual green forest was beautiful. The landscape has changed from city to rural to green and back again several times.

Though it was overcast, we were lucky enough to see Mount Fuji in the distance and Nick even got a few good pictures!

We changed trains at Ngoya to make our way to Takayama.  At Ngoya station, we got some more snacks for the 2 hour train ride such as chocolate pocky and chocolate covered almonds. The landscape became more and more rural as we travelled.  There were beautiful rivers and rock gorges along the train ride.  We even spied a few cherry blossom trees with flowers still which made me incredibly happy.

Arriving in Takayama the Ryukan we were staying with had sent a bus to collect us.  This Ryokan is apparently one of the most traditional in Japan.  Anywhere with Tatami mats, you are not supposed to wear shoes.  We were given sandals at the entrance. Nick’s are comically too small and mine are too big! Probably because they are all the same size. There are even different special sandals for the bathroom.

The Ryokan rooms are lovely with futons spread on the floor.  Nick unfortunately, is too tall for his futon and so his feet will be sticking out the bottom of his sheets.  He insists that he is fine though and so I will leave him to it.

Dinner this night was a traditional Ryukan meal which was purely magical.  The region’s specialty, Hida Beef was the star of this show, but there was also grilled salmon, soup, rice, assorted egg and pickles, a kind of chinese broccoli dish and golden kiwi slices for dessert.  I think the reason I liked this dish so much was because it was full of simple flavours and clean tastes. 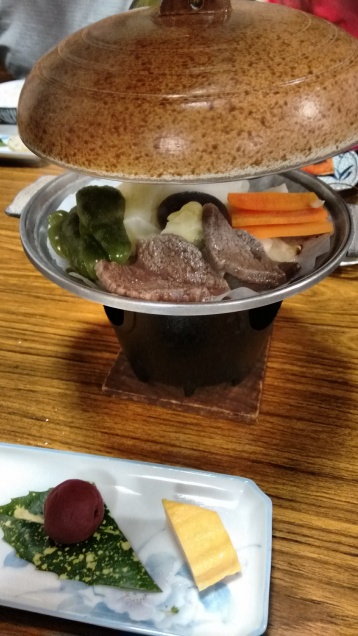 Cooking up a storm!

Dinner at the ryokan

After dinner, Nick and I tried Onsen bathing for the first time.  You get undressed in a front entrance room and leave your clothes there.  Inside the bathing room (This room felt very much like a sauna), you get out little stools and buckets and sit in front of one of the mirror stations.  You can’t see anything at all in the mirrors though as they are all steamed up.

You rinse off with either the bucket or using a handheld shower head and then lather up and rinse off again.  Repeat as necessary until you feel clean.  Then you can enter the communal tub.  The tub is apparently only filled once a day but it is clearly chlorinated to get rid of any nasties.  It’s a lot like getting into a heated pool but you are stark naked in front of a bunch of strangers you probably don’t know that well. The baths are gender separated though, so it’s not as confronting as it could have been.

It was actually an incredibly relaxing experience. One thing that didn’t quite work for me was that we had no towels in our room.  Other members of our group DID have towels though -Nick and I somehow missed out.  What we DID get was a small handtowel sized cloth which looks a lot like a dishtowel back home.  …That’s what I used to get dry after my bath.  I’ll have to ask about full-sized towels for us tomorrow.

After my bath, I got to put on my Ryokan provided yukata which is a cotton robe similar to a kimono.  It was comfortable and warm and I enjoyed strutting around the Ryukan with it on.  It also had a strange wool overcoat which looked…a little odd honestly.  But this was only for warmth.

We joined the others for drinks in the small lounge and had a bit of a chat and a laugh before turning in for bed.

Tomorrow we head off to the Hida village and go for sake tasting in Takayama in the afternoon.  Stay tuned for more exciting updates!