It was with some sadness that Nick and I left So’s Airbnb this morning.  So we did the only thing that seemed reasonable to cheer ourselves up.  Cake for breakfast.

There is an interesting subset of Japanese culture which is obsessed with western baking and frankly, they do it better than we do. We went to a place called “Sunday Bake Shop” in Hatsudai, very close to So’s home.  As the name suggests, the place is only open for a few short hours on Sunday morning from 9am.  We arrived there at 9:10am and there was already a fairly long line out the door.

When we got to the counter front, we were absolutely spoiled for choice.  There were so many cakes, slices, scones and cupcakes to choose from!  All baked fresh.  We settled on a coconut slice, lemon (pound) cake, baked cheesecake and a chocolate brownie with a couple of coffees to wash them all down.

Its so rare that you can say this about baked goods, but nothing was disappointing.  The cheesecake was semi-sweet and this allowed the cream cheese flavour to really shine.  The coconut slice was light and rich but offset by a thin spread of bitter orange jam inside.  The lemon cake was sweet with a basic glaze in place of a thick icing and you could taste and see the lemon rind it was made with. And the chocolate brownie was sinful. I will be dreaming about this brownie forever.  Someone help me!  I need to stop eating food!

After this, we headed to the train station to navigate our way to Tawaramachi station which was very close to our hotel where we would meet up with the rest of our tour group for the next couple of weeks.

The trip was uneventful and we made it to the Asakusa Sunroute Hotel with no worries. We were way too early to check in though so left our bags with reception and decided to find a way to wile away some time.  We decided to make our way to the Toyko National Museum in Ueno as it was only about 1.5km away.

Setting out on our walk, we were sidetracked by some commotion in the streets.  There was some kind of festival happening. On speaking about this with our tour leader later, it is apparently the prelude to a much larger festival that will happen later this month, Sanja Matsuri (Sanja Festival).  We saw lots of people crowding together, carrying a mikoshi which is a model representation of a shrine.  There was also street food and game stalls and children running around in colourful yukata which made it seem really lively!

We made it to the Museum eventually and had a look around at all the exhibits.  I really liked the ceramics and the swords in particular.  The exhibits about Japan’s religious background were also incredibly interesting.  Nick thought the ancient armour was cool and we both enjoyed the many forms of artwork. Unfortunately, we were not able to take pictures of all the exhibits that we wanted to as photography was prohibited sometimes, but it was all stunning to look at.

After the museum, we headed off for lunch at Ichiran which is a chain in Japan specialising in ramen.  Before arriving at the restaurant, we did see our friends the Mario Kart racers again.  Amazing!  Nick even got a video this time!

The restaurant required us to line up, but it was very organised lining, with order forms being passed back down the line so you could finalise your order before you were even seated.

Both Nick and I went with the traditional tonkatsu ramen (pork broth ramen) with spicy sauce added.  Once we got to the front of the line, you could purchase meal tokens which you tallied from the order form and then you were seated once seating became available. We were seated at little cubicles where we were given our order through a small window.  A blind was then dropped over the window from the server side. Presumably so we couldn’t see the servers zipping up and down bringing plates to people. 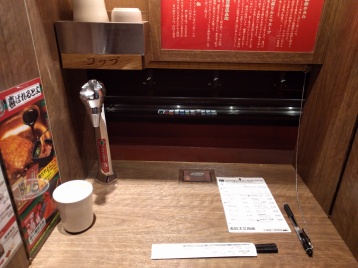 This meal was really simple but filling.  After such a sweet and heavy breakfast, this was a very welcome lighter meal. We were both completely sated after this meal and we finished the bowls (though Nick valiantly finished off my broth as I couldn’t quite eat it all).  The sauce in this wasn’t hot per se, but it did open my sinuses up and I thoroughly enjoyed the spicier taste!

After this meal, we headed back to the hotel to check in and freshen up before meeting our tour group at 6pm.

Our tour leader, Rika took us through the travel itinerary and took our documents and paperwork before taking us out to a yakitori dinner in Shinjuku. The izakaya was called Isuzu & Komatsu and was located down “Memory Lane” – an area of Shinjuku which dealt in black market foods (mostly poultry) during the war.  As Rika explained it, people were given food stamps for basic foods and had to resort to the black market to get other food when needed.  They came to this area to get yakitori – (traditionally) chicken skewers cooked over charcoal grills.

The food we had consisted of more then just plain chicken though.  We had pork, gizzards and cartilage, as well as sides of kimchi, tofu and edamame.

Nick managed to eat a couple of skewers of heart before being told what it was.  He was fine with it though and continued to eat it even once he knew what it was.  I tried everything but found the gizzard to be really tough meat and not as flavourful.

I also tried some sake with my meal which was pleasantly sweet rather then just rough!

We took the time to get to know our tour companions over dinner and here are the names I picked up:

Marg and Peter from Wangaratta, Australia

Phillis and David from America

Mark and Jennifer from Belgium(?)

And there were four other people on the tour whose names I didn’t grab.

After dinner, we explored Shinjuku at night which is a completely difference experience then by day!  The neon signs were all lit up and we visited a pachinko parlour, which is basically a cross between a video game arcade and a casino.  One of the group said it was like Las Vegas, only louder.  In pachinko the aim is to collect buckets of ball-bearings (in lieu of chips or similar I suppose?).  You can cash in the ball-bearings for money with each bucket coming in at approx $60USD. I saw people there with buckets and buckets so it’s obviously an addiction in Japan.

We then headed up to the Tokyo Metropolitan Government Building which has an observatory deck so we could look at the Shinjuku skyline by night.  It was an impressive sprawl of light and colour and surprisingly romantic to look at with Nick.

After this we headed back to the hotel before bidding farewell to the group, to meet them again tomorrow for more entertainment and food.