Slight change of plans for today.  Originally we had intended to go to the Imperial Palace but after reading last night that its not very exciting and you actually can’t go IN we decided to skip it for Shibuya’s most highly rated activity: Meiji Jingu.

On the way there, Nick and I were passed by a Uyoku Dantai van – a group Japanese Nationalist right-wingers.   The van was pretty serious looking.  You can see the speakers set up on top which were very loud.  Not as exciting as an ice-cream van unfortunately.

It didn’t take us too long to make our way to Meiji Jingu and we stopped for some 7-11 snacks on the way to ward off hunger.

Meiji Jingu is a Shinto shrine in Shibuya which enshrines the souls of Emperor Meiji and Empress Shoken (though their bodies are entombed in Kyoto).  The shrine commemorates them as deities in the Shinto religion.  The Shinto religion has no founder, no holy book and no concept of trying to convert other religions to Shinto. Instead, they value harmony with nature and virtues such as Magokoro (sincere heart). Shinto believes in the concept of kami (divine spirit) and kami can be found in people, nature and mythology.  The Emperor was a writer of waka (poetry).  An example of his work:

In a world which is fraught

Our hearts should remain filled

With an open calmness.

Other cool things at the Shrine included a Gyoen (garden) with a well built by a legendary Samurai, A wall of sake barrels wrapped in straw and wine barrels for consecration and of course, the main shrine itself where I wrote a prayer for “Matrimonial contentment & safe travels” ( as we are on our honeymoon it seemed like the thing to do). 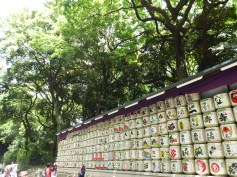 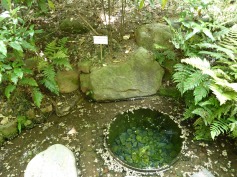 After visiting the shrine, we decided to shake off the sombre reflective tone by heading into Shibuya, a very trendy neighbourhood in Tokyo. This was by far the busiest area we had yet visited and seemed to be filled with tourists.

It was here, I saw the most bizarre, but cool thing I have ever seen in my life.  On the main street, there were people in go-carts, dressed up as characters from Super Mario Kart. It was incredible!! Live action Mario Karts!  Unfortunately, neither Nick or I were quick enough with the camera so we don’t have a shot of this to share. Surely its not a safe mixed in with the local traffic!  Having said that, it wasn’t as busy as you would think on the roads – but still!  Odd!

Nick had picked another winner of a food spot here with Genki Sushi.  Finally.  Finally I got to see the robots that I had been imagining everywhere in Japan. And they were serving me my food.

You used the touchscreen to order your meal selections and then little robot waiters on tracks would bring you your order when it was ready.  There were 3 rails running, delivering food to the patrons.  It was a slightly different take on the traditional sushi train model and very, very fun.

After lunch, we did a little shopping in the area and I picked up a new cardigan as I forgot to bring one with.  We then headed back to home-base to regroup before heading out again for drinks and dinner.

A little about staying in an ultra small Japanese abode:

What they tell you about apartment life in Tokyo is absolutely correct.  The houses are tiny.  The area you have to move in is extremely limited.  I keep bumping my head on the light fixtures!!  That is an absolute first for me as I am quite short.

However, this isn’t as intolerable as it might seem.  At least, speaking for the Airbnb we are currently cohabiting, it doesn’t feel like we are cramped or confined.  Instead, it feels cozy and comfortable.  You might have to get used to brushing your teeth in the kitchen sink (aka: the only sink) and taking your shoes off at the door, but these are just cultural differences.  The stay here has been 100% fine.

Here is a link to So’s Airbnb page with pictures of the apartment and neighbourhood we are staying at.

So, back to journalling.

We headed out for dinner and finally it seems like there are people in Tokyo again.  Tonight we had to fight our way though the crowds I had expected all week.  Though in truth, the people of Tokyo seem to live for the night.  Most places only open from 10-11am and stay open very late.  You barely see anyone on the streets before 9am.

Nick took me to a great place for dinner tonight.  Hamakatsu is a restaurant which specialises in tonkatsu which is deep fried (usually) pork fillets.  Amusingly, we walked into a restaurant thinking it was Hamakatsu and were really upset when we couldn’t find any katsu on the menu.  Turned out the restaurant we wanted was upstairs.  We apologised and left with zero shame.

And it turned out to be the best choice!  The downstairs restaurant was kind of sterile and boring looking whereas Hamakatsu was great!  It had a sophisticated but friendly ambience.  It didn’t feel like a tourist spot and we were the only Westerners there.

Happily, the meals came with an instruction set for Westerners who don’t know what to do (i.e us).  You pour some sesame seeds into the bowl pictured above and then grind them up with the wooden pestle.  You then add a sauce to the sesame (special or spicy – I chose spicy) and you then dip your tonkatsu pieces in and eat them.

We also got rice (mine is red rice with barley), cabbage with a sweet soy sauce, pickles and a soup.  Nick chose a miso soup and I got a rich pork broth (cause I felt this meal was a little lacking in protein).

There was also table service topping up a cold oolong tea whenever we drained a cup. Again, the meal was a LOT cheaper then I would have expected, especially with the table service, coming to approx $30AUD in total.  This was one of the more expensive meals we have splashed out for on this trip.

We decided to have a cheeky drink at a bar our host recommended as well.  It was called Box and was also located in Shinjuku, a short walk from the restaurant. Unfortunately they only served beer and cocktails so I had to have a cosmopolitan.  Tsk, tsk. Nick had a Sapporo beer.

Side note, the coaster Nick’s drink came on said “The enemy of mankind is alcohol, but the bible tells us to love our enemies…” This gave me a chuckle.  Also, I think that might be paraphrasing the bible slightly.

After this drink though, my legs had had it. Clocking in the day at an impressive 24km of walking you can see why!  Two days in a row of over 20km of walking!  Though with all the food I am eating, I better get walking double time!

We headed back to home-base to put together our gear for check-out tomorrow. We will join up with our tour group tomorrow evening in time to start the tour on Monday.  Exciting times ahead!  But it also means leaving this part of Japan and I have been enjoying it immensely!! Conflicting feelings going on here.

Tomorrow, on to Ueno!