This morning saw us waking up lazily for our last day in Fira.  We had decided the night previous to have a very low-key day since it was going to be a transit day and after yesterday’s hiking effort, we were both pretty tired!

We had breakfast once again with Costa Marina Villas and once again were immensely pleased with the offering.  Instead of toasties today, we got cute little tomato pizza flat breads, flavoured with tomato paste and sweet paprika, and we got a fruit salad with Greek yogurt as well. We also got a couple of little sweet pasties, a lemony custard filled filo pastry and a mini baklava slice also.

Satiated by another excellent breakfast, we took a small walk around Fira town square before coming back to the hotel and finalising our packing for the move to Oia.  We left our bags with the hotel reception and once again, went for a wonder around the quieter outskirts of Fira.

We eventually found a coffee shop, Coffeelab Santorini where we sat and had a few coffees in the bright morning sun. The day was starting to warm up so I had an iced coffee, but Nick said they served a really fantastic cappuccino, on par with what he would expect from Melbourne.  The whole shop was actually very Melbourne hipster in feel.

After a while we did keep wondering around.  I had to use a public restroom which charged €0.50 to use and was confronted with a squat toilet.  <Sigh> My travel nemesis struck again. I don’t really think men in general appreciate how difficult a squat toilet can be for a girl to use. Especially if she is wearing shorts/pants.  The struggle is real. However, I persevered cause dammit, I really needed to go! It was the first time on our journey so far that we had come across this kind of toilet.  Hopefully its the exception rather than the rule.

After this and some through hand washing, we decided to find some lunch. We were going to try the Greek taverna we weren’t able to go to on Saturday night, Kyra Niki and hopefully be able to eat there.

Luck was with us today and the place wasn’t too busy at lunchtime.  We were able to have our pick of seating and so chose a small table on the shaded patio outside the restaurant where the breeze was blowing deliciously through and cooling us.

We were attended to by the main chef, a balding, friendly Greek man who spoke English very well.  According to several reviews on TravelAdvisor he also speaks about 5 languages passably and he was very enthusiastic about telling us what was on offer.

We elected to have a pork tenderloin fillet, a grilled squid and a shared Greek salad.  With some bread also provided, we guessed that this would be plenty of food. When the plates arrived, we were almost afraid that it was too much but the food was all excellent and since we didn’t have a specific timetable to keep to, we eat it very slowly and enjoyed it thoroughly.

Once we were done with our mains, they brought us some complimentary lemon almond cake slices which were just the perfect size for a small sweet on top of our amazing lunches. 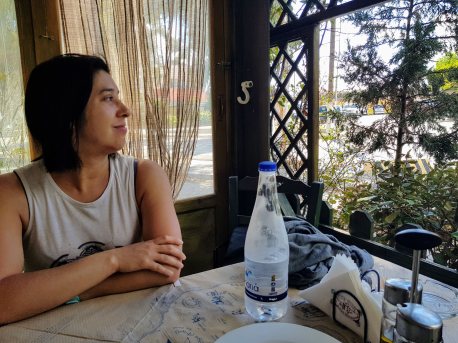 After lunch, we collected our bags from Costa Marina Villas and said farewell to the lovely owners there who made our stay so excellent.

We headed to the bus station to head on to Oia.  We probably should have expected it as it was late evening, but the buses were very crowded and we couldn’t even get on the first bus we tried.  The did immediately direct us to the next bus which was scheduled to leave 20 minutes later so it wasn’t a drama, but this bus was quite overcrowded and many people had to stand.

Happily though, Nick and I got seats which is just as well as the road was quite twisty and there were a lot of bends and slowing down/speeding up going on.

We admired the scenery once again as we were going though but it wasn’t long at all before we arrived in Oia.  We quickly retrieved our bags from the bus hold and made our way to Christos Apartments, our home for the next three nights.

Oia town is very different in feel to Fira.  For one, its a pedestrian only town. No cars or scooters or ATVs screaming by you every 2 minutes like in Fira.  It also seems to boast much higher quality goods for the tourists, including boutique linen clothing that I shamefully have already fallen in love with, and some of the most beautiful ceramic wear I have ever seen.

The walk to Christos Apartments saw us pass by many stalls where I really wanted to stop and ogle but we would have plenty of time for that in the next few days.

The hotel we are staying at is again, a rather large apartment space.  Its a bit quirky in that the bedroom kind of feels vaguely cave-like and there are all these interesting features and small windows about. Never-the-less, Nick and I have both decided we quite like this one too.  The bathroom is down a steep flight of stairs though which I worry about Nick navigating in the middle of the night. 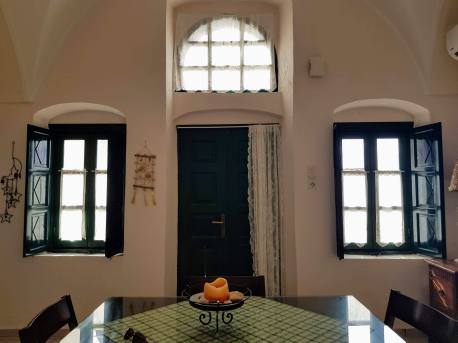 They get points for also not having a shower curtain (very similar shower set up to the Costa Marina Villa showers, but not as pretty!)

One of the best features of this place however, is a private rooftop viewing area where we could sit and watch the Santorini sunset which is exactly what we did. 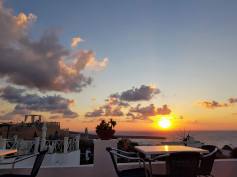 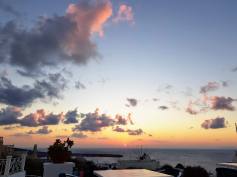 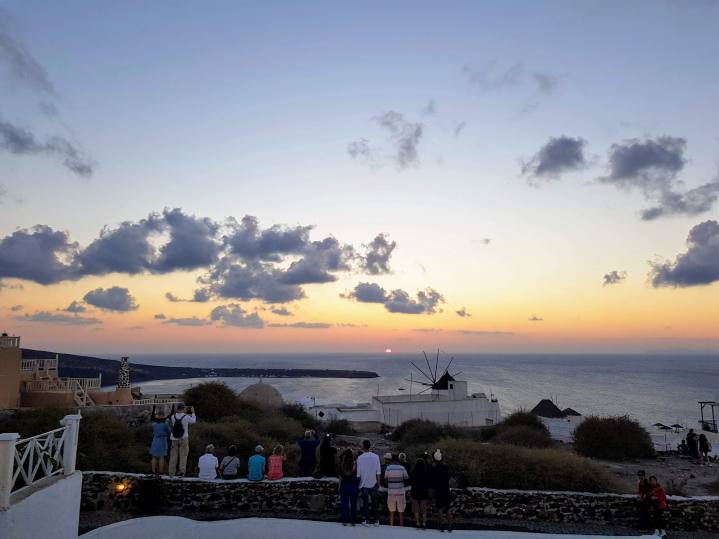 There was a tiny bit of haze on the horizon which prevented this sunset being as spectacular as it could have been, but it was still lovely to watch the sky change gradient from clear blue to dusky orange and pink.

We turned in shortly after this as lunch was enough to sustain us (neither of us felt like eating dinner) and we were happy to keep the day very low key.

Tomorrow we might hike the Oia-Fira hiking path or maybe catch a sunset cruise to watch the sunset from out on the water. Either way, I am very much looking forward to exploring Oia more in the next few days.