This morning, Nick and I awoke early in the hopes of getting early enough to Kamari that we could catch a shuttle bus up to the Ancient Thera Ruins.

We had coffee and juice, a bread basket of wholemeal and white baguettes (toasted! I thought they hated toast here!), a little almond and chocolate cake slice, a boiled egg each in sweet little egg cups, creamy Greek yogurt with sour cherry preserves, a fruit bowl to share and ham and cheese toasties. The table was also set with Nutella, honey, marmalade and fig jam spreads – all of which Nick tried.

In truth, there was too much for us to eat and though Nick had a valiant tilt at it, we ended up not eating all of the ham and cheese toasties and leaving a fair bit of the fruit and bread behind.  We did cheekily snag the cake slices for eating as a snack later though. 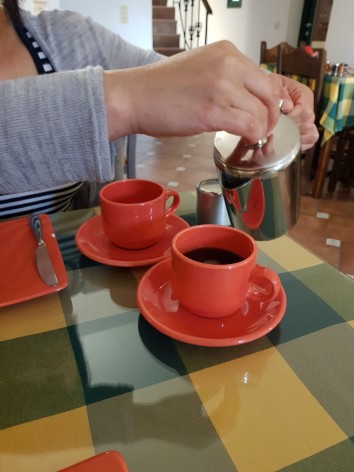 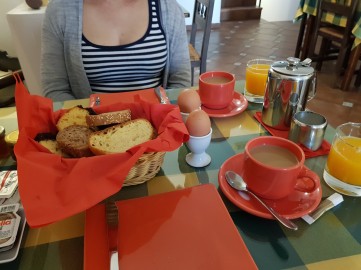 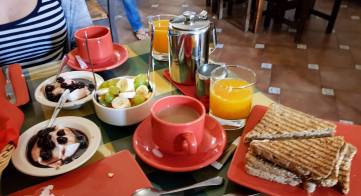 After a quick stop back at the room to brush our teeth and grab our gear we were ready to head out to catch the bus. As we were leaving, one of the owners asked us where we were off to. We explained that we were going to look at the ancient ruins and she excitedly endorsed hiking up the mountain.

Apparently there is a ‘hidden’ hiking trail that is quicker to walk up than the torturous main road (which we were going to catch a shuttle bus up) which also along the way had a church carved into the mountain-face. Intrigued, Nick pulled up the Google map satellite view as the road wasn’t marked on any map we had looked at. Sure enough, the owner, Marianna I believe her name is, pointed out the faint trail on the map,

She warned that it was steep, but not very far (only a few kilometers) – so we decided to give it a go!

we boarded the bus to Kamari as planned, though it was a much less flash bus than yesterday, and once there, made to find the trail. From the bottom, it was incredibly daunting. It looked like an extremely vertical climb.  However, we had made it there and it looked more interesting than catching a shuttle bus and as Nick pointed out, we could keep €20 in our pocket to spend on more fun things during the trip by skipping the tourist bus.

It was a cool morning which we really appreciated as we made our climb.  We stopped quite a few times on the way as my legs in particular were already aching from the previous days stair-climbing efforts around Fira. Along the way, it also started to rain lightly which was welcoming for the cool repreive, but it did make the stony path a little treacherous to navigate.

Eventually, we found the small church Marianna had mentioned and we rang the bell in the courtyard and checked out the natural spring that they had built the church next to.  The spring was pretty cool, set in a cave like area behind the church.  Nick went in to explore but I was only game to stick my head into the entryway as I wasn’t at all trusting of the wet stones and my precarious sense of balance. 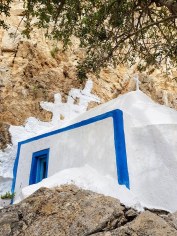 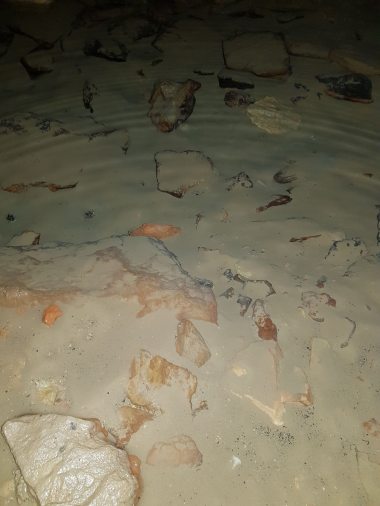 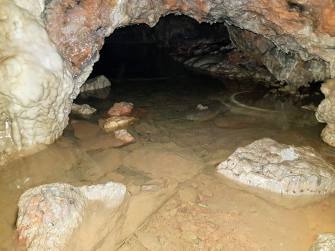 The rest of the climb was uneventful, though we did manage to take in some magnificent views of Kamari and its huge stretch of black beach. Once we reached the trail summit, we had a little further to walk on the main road to get to the Ancient Thera Ruins. Happily, when we arrived, ready to pay the €4 entrance fee, we were told that the entry was free today and we should enjoy the ruins.  Lucky!

As per Wikipedia: Ancient Thera is an antique city on a ridge of the steep, 360 m high Messavouno mountain on the Greek island of Santorini. It was named after the mythical ruler of the island, Theras, and was inhabited from the 9th century BC until 726 AD.

It was quite stunning to walk through the remains of the city and realise that it was a bustling scape thousands of years ago. They had remains of gymnasiums, administration buildings, houses and monuments.  I also learned that the ancient Greeks were big on adopting the gods of other religions and there were quite a few temples for Egyptian and Ptolemaic gods as well as the more familiar Greek pantheon.

Speaking of which, there were also plenty of ruins dedicated to the worship of Greek gods such as Aphrodite,  Athena, Tyche to name a few. 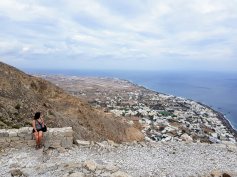 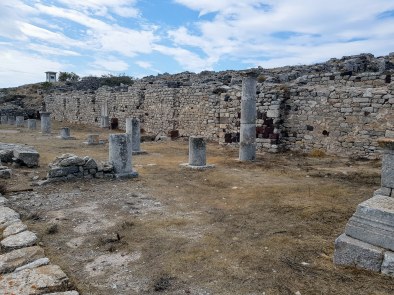 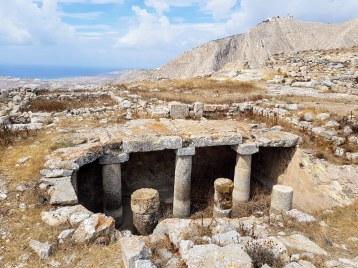 The ruins as a whole were surprising large and it was well worth the effort to hike up there.  From the ruins we could also see the town and beach of Perissa which were on the other side of the mountain. Marianna had also recommended walking down to Perissa and catching the bus back from there.

When we were finally ready to leave the ruins, we did just that. It took only about 30 minutes to walk down to Perissa from the ruins and the day, cool in the morning, was now very, very warm. We met some funny, exhausted tourists who were headed in the opposite direction, some of which complimented my hiking sandals.  We also ate the cake from our breakfast in the morning on the way.

Nick decided to once again, take a dip in the ocean once we got to the Perissa beach while I hired a daybed along the beach so we would have some shade and shelter.  When Nick got out of the water, he showered and dried off a little in the sun, before changing back into his morning clothes.

The beach at Perissa, like Kamari is a black pebble beach.  However, unlike Kamari, the pebbles are much smaller and the beach seems a bit cleaner without so much seaweed and detritus washed up on the shore. I actually enjoyed the beach here better than the previous day at Kamari. 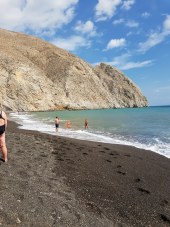 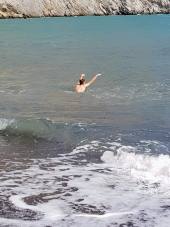 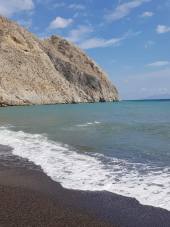 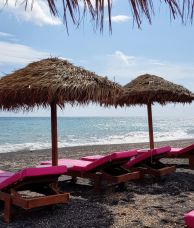 While I guarded the sunbed and Nick’s drying swimming clothes, Nick went in search of lunch for us. He brought us back some great gyros from Gyros Place which sold their gyros at a reasonable (read, not a rip-off) price.

Nick also got a well deserved beer to have with his lunch and we relaxed while eating on the beach.  Relaxing turned into a bit of a nap and we awoke a short time later and decided to head back to Fira to have showers and to relax a little at the hotel.

The bus ride back was pleasant and we just enjoyed the passing scenery of Santorini.  Once we got back to the hotel we showered and relaxed, read and blogged.

Later in the evening, we decided to head out again to explore and have some dinner. We had been told about a truly freaky tourist experience by Phil which sounded like it might be fun for our aching feet. Ichthyotherapy – or ‘fish therapy’ involves dunking your feet in a tub of water and letting the fish eat the dead skin on your toes and heels.

I have a healthy level of scepticism when it comes to therapies like this, but it did seem like a fun way to kill a bit of time before dinner.  Nick and I both got a 15 minute time slot.  Before dunking your feet in the water, your feet are washed and you are given little plastic booties to wear for the short walk over to the fish tubs.

You then simply drop your bare feet into the water tank and let the fish do their work.  Initially, I didn’t like the sensation. It was tickly and weird! Nick was losing his mind at first as well until he got used to the sensation. Annoyingly, as Nick predicted the fish seemed to LOVE my gnarly feet.  I have very dry skin in general so the fish probably looked at my feet as though they were Christmas dinner come early. 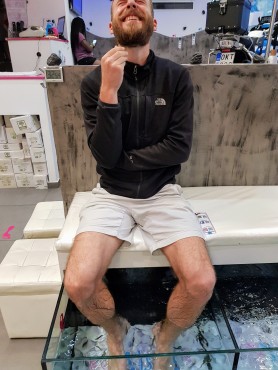 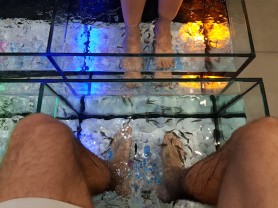 I don’t think its an experience I would care to repeat but it was interesting and weird to see and feel the fish licking away at our feet.

Afterwards, you just pull your feet out of the water, dry off, put your shoes back on and away you go.

Since the fish had fed off us, we decided to feed off fish and headed out to find a nearby seafood restaurant google recommended.  Unfortunately we were thwarted in our revenge on the fish as the restaurant didn’t seem to be where it was supposed to be.  So instead, we checked out a very highly rated souvlaki joint called Lucky’s Souvlaki.

We each ordered a gyros and a MAMMOTH bowl of Greek salad to share. The Greek salad was actually sensational and easily the best we have had. This one may have stood out with the addition of capers – it was especially zingy and tasty!

Once we had eaten however, we wondered the street for a short time before it began to rain lightly.  Since the night had cooled down once again, we elected to head back to the hotel and have an early, cruisy night.

Tomorrow we would head on to Oia for our last days in Santorini and Greece.

Km’s walked: 12.2 (but some of these were practically vertical!)