Our last morning in Madrid dawned bright but cool.  It was a sad feeling knowing that our holiday was almost over and we would begin the leg home but it was also somewhat of a relief.  A month on the road, while its been undeniably fun, does make you long for simple home made meals.  Though we still had a couple of days of indulgence left and we intended to make the most of them.

We dressed, packed and left Sandra’s Place AirBnB after handing in our keys to Dencho, Sandra’s boyfriend who stopped by to collect them.  He seemed really lovely and though his English was as limited as our Spanish we had a short chat before we departed.

We grabbed a coffee at Hola Coffee as well as a bowl of amazing porridge with pears and walnuts and a serve of toast and home made marmalade. We then headed to the Metro station to catch a train to the Madrid Airport.  This part of the trip was a-okay and went very quickly.  It took about 45 minutes.  I may have snoozed for some of this trip. 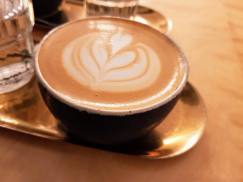 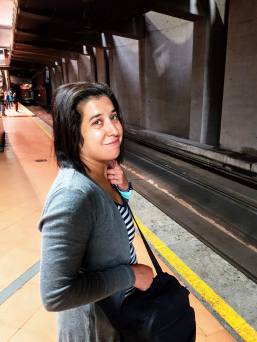 We arrived at the airport rather early and got through security and passport control quickly and without incident.  With a couple of hours to kill we decided first to work out where our plane gate was located.  This turned out to be a good choice as it turned out our gates were located at a satellite terminal and there was a short train ride of 23 minutes to get there.

We jumped on the train and headed to the T4S gates.  Once where, we still had plenty of time to kill – the gate information for the flight hadn’t even been posted on the departure screens yet.  So with devices running a little low on juice, we headed to Burger King and got a table with charging ports available.

To not be rude (seriously) we ordered one medium whopper meal to share.  It was actually huge and I am glad we only got the one.  Nick polished off the burger and we shared the chips but there was no way we were getting through the entire drink between the two of us – it was 750ml!

We killed time here charging our various devices and occasionally one of us would get up and stretch our legs. Eventually, the gate information came up and it ended up being only a short walk from where we had been camped at Burger King.

Luckily for us, when people were being called to board, we were one of the first groups called up. This is where the only hiccough of the day came. When we tried to get our boarding passes scanned, we were told we had to get our tickets checked at another desk. A tad concerned, we went over to the other desk as indicated and there was a little faffing around.  With no further ceremony though, we were told we could then board the plane.  Not sure what the issue was, but I guess it was minor. 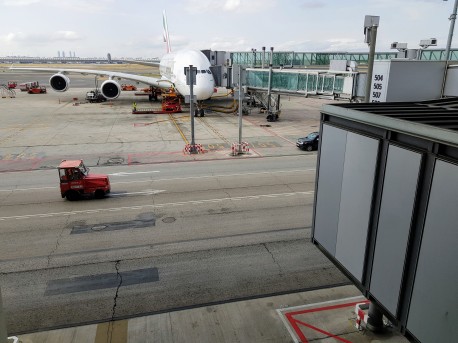 We were sitting in the second row of the lower deck of the A380 plane so nice and close to the front.  We settled pretty quickly and soon enough we were off.

Neither of us really slept for the flight though we both liked the meals that were served (I had a stewed beef and Nick had a creamy tomato and chicken casserole type dish).  This was supposedly a ‘lunch’ but as it was closer to 6pm (Madrid time) it was basically dinner.

The flight was seven hours long so we filled in the time by watching movies/reading.

We were served a bit of a light snack in a turkey and cheese roll before landing in Dubai.

We were hit by that familiar Dubai heat on the sky-bridge while disembarking and made our way through the pandemonium of the airport (making sure to register for the e-gates so we wouldn’t have to use the counters again) and then we were through.

We knew there was a free shuttle to our stay for the night, the Premier Inn though we thought we had missed it.  We decided to check, just in case and honestly, it was less than 5 minutes until the bus pulled up for us.  As it was about 1:30am (Dubai time), I was rapt with this.

The Premier Inn was probably only about 200m away from the airport, but you weren’t able to walk there.  It was a crazy twisty drive and I actually saw the hotel from all 4 sides before we finally got there.

Check in was quick and the lady who sorted us out was lovely. One we made it up to our room though, we crashed out and slept like the dead.

Tomorrow: Heading back to Dubai