Unfortunately for us, this morning dawned cold.  Not raining at least.  But very, very cold. Apparently there has been another system of hurricanes moving across the regions which have played havoc with the weather.  We seem to have been unlucky with the weather on this trip! So many freak hurricanes and weather systems conspiring against us!

None the less, we woke up relatively early this morning as we planned to participate in a walking tour. We wanted to make sure we were fuelled up on the breakfast buffet offered by the hotel before we set out so headed up to the terrace to check out what was on offer.

It was a nice spread of food with plenty of breads, pastries, cheeses, cold meats, salads, cereals, juices and hot foods such as bacon, scrambled eggs, etc. In addition to these, there were all sorts of condiments and spreads available as well.

Having a bit of a craving for fresh vegetables, I went for a bit of a breakfast salad with toast, bacon, a boiled egg and a coffee and a juice.  This all being far too healthy for a holiday breakfast, I also had a Portuguese egg tart which was lovely.  Nick as always stocked up a little harder then I did, having a bowl of cereal as well as a plate of hot food (which Nick referred to as ‘grown up food’ after his coco-pops ha ha). 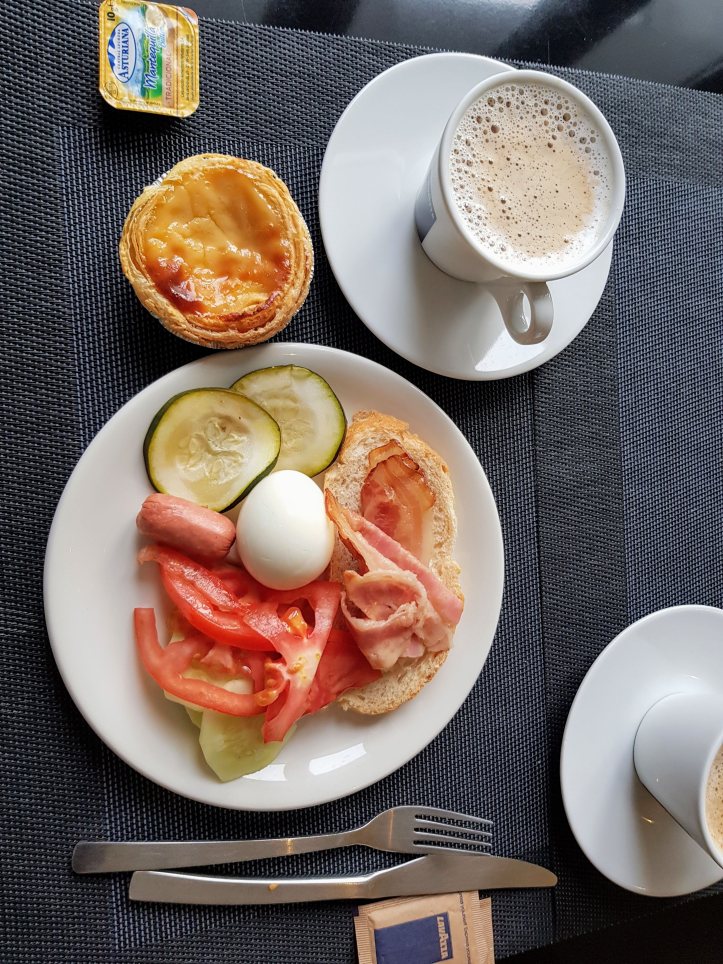 We were both pretty happy with the breakfast and then headed downstairs to the hotel entry as this is where we were supposed to be picked up.  There was a couple from Chile also waiting for the walking tour and while they spoke passing English and we spoke terrible Spanish we managed to carry on a bit a conversation.

They convinced Nick that it was freezing outside and he headed back up to quickly change into long pants and a warmer top AND his jacket. Just as well they did because I ended up stealing his jacket as I hadn’t thought to pack anything heavy duty enough for this sort of weather.

After a while, we all decided that we weren’t going to be picked up from the hotel so we decided to just walk to the meeting point which was the Plaza Isabel la Catolica which we had visited the previous day.

The tour was free and we were split into a couple of groups – English and Spanish speakers. We said goodbye to our new Chilean friends and headed off with our group.  It was cold enough that Nick donated his jacket to me for the day, though I felt super guilty for taking it from him.

Our English speaking guide, Alba was very energetic and bubbly.  Nick and I both liked her.  Our group had about 10-15 people in it from all corners of the globe including Iceland, Greece, Germany and America. Weirdly there were a couple of girls from Latin America who choose to come with us rather than the Spanish speaking group.  This would have been fine, but they kept asking questions to Alba in Spanish which Alba would answer to them and then translate for the rest of us.

From our starting point we headed on to a building that was previously used as a sort of marketplace for Moorish coal and silk traders. I can’t remember the name of the building unfortunately but it had a lovely courtyard area.  Nick admired the grapevines growing across the courtyard – he even asked Alba how to get them (he was kidding of course)! 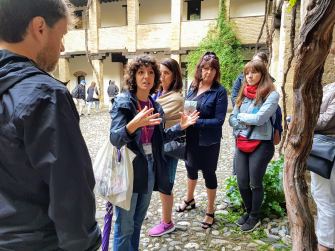 From here, we explored many other sites around Grenada, with Alba diligently explaining the history and background we needed as tourists to understand what we were looking at.

I really love a guided tour for exactly this reason.  The previous day, Nick and I had walked through a square, the Plaza de Bib-Rambla with nary a thought for our surroundings.  On our tour, Alba imparted its dark history as part of the Spanish Inquisition.  In this square, ‘trials of faith’ were held. These were large, solemn occasions and designed to instill fear and respect in those who attended them. Sentences for accused would be announced and those found guilty would either be taken away to be executed or burnt alive in the Bib-Rambla itself. This was also the site for one of the largest book burnings of the Inquisition. 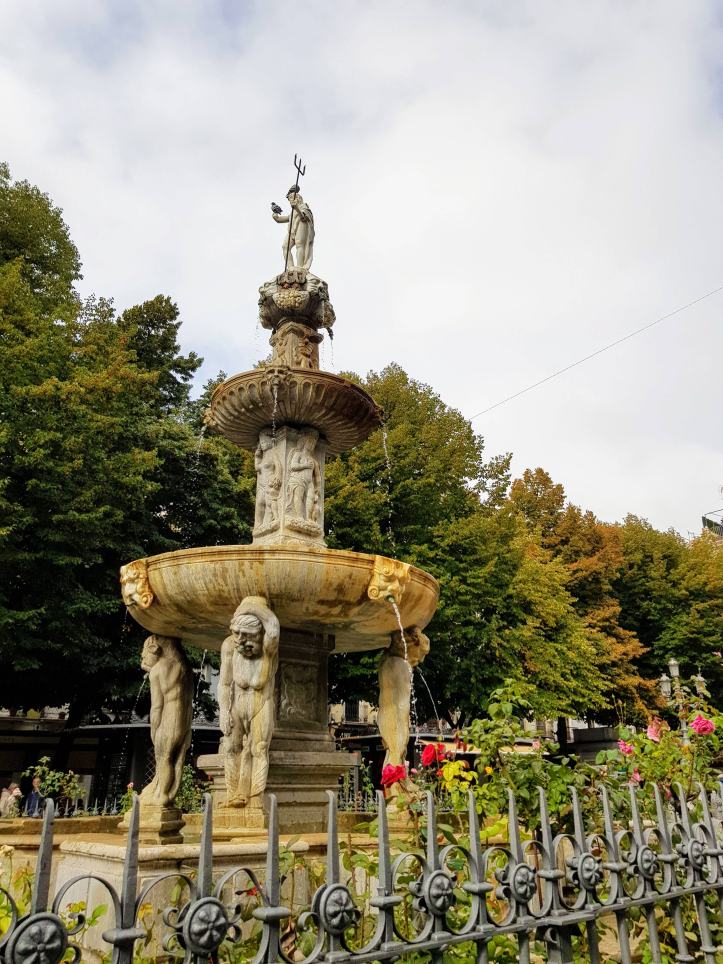 I also enjoyed hearing the history of the Alcaiceria market which was an old Moorish silk market.  Unfortunately, the original burned down in 1843. The market was named after the Caesar of the time who granted the Moors the rights to trade in silks exclusively. 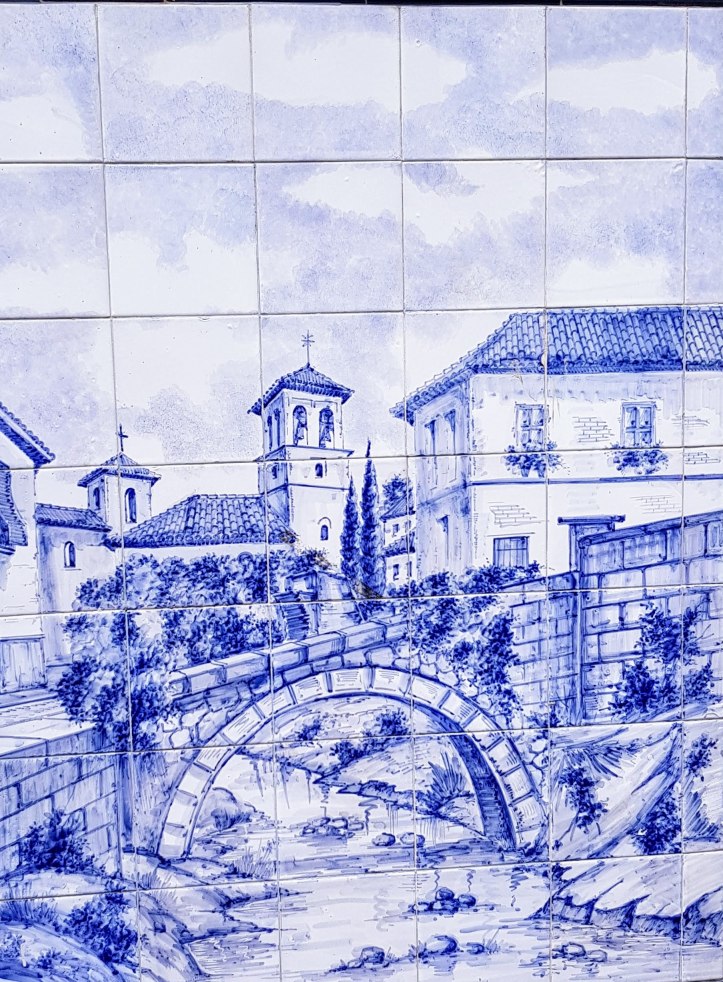 One of the other parts of the tour Nick found particularly interesting was the explanation for the ‘graffiti’ on the walls of the Grenada cathedral (which Alba explained was the 4th largest in the world).  It turned out that scholars, once they graduated from the University would write their names (and degrees) on the walls of the church.  These date back from 1550–1650 and so are preserved.  They were written with a mixture of bulls blood and iron oxide, hence the striking red colour.  As Alba said, it was kind of the LinkedIn of the time. 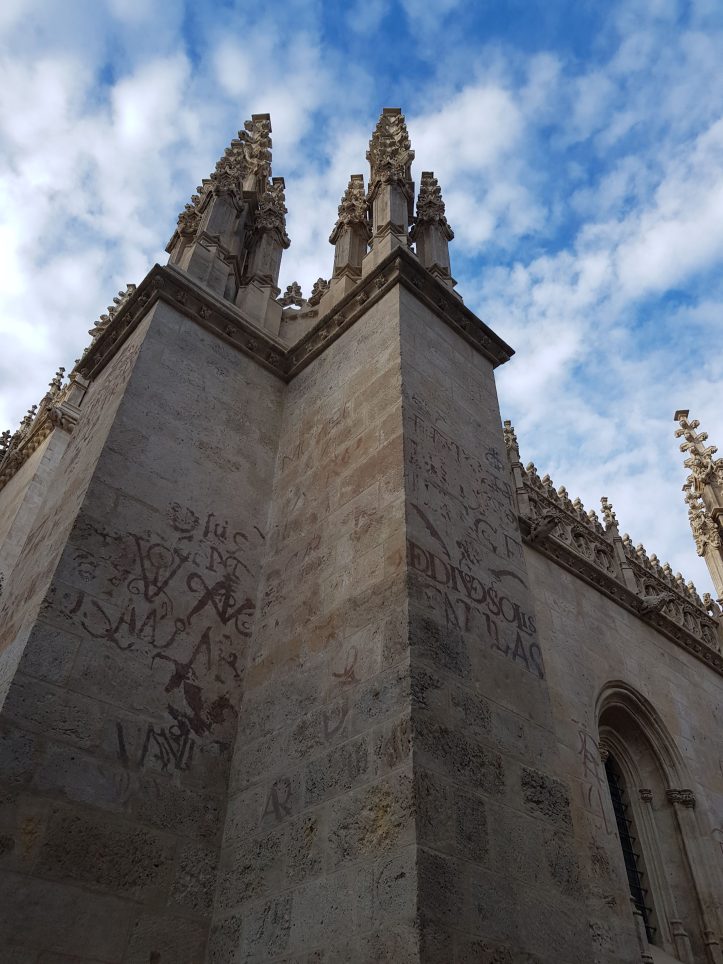 The tour continued in total for about 2.5-3 hours and we saw many sites and learned many things about Grenada and the Alhambra which we wouldn’t have otherwise.

One thing actually gave us both the heebie jeebies was the Church of San Gregorio Bético, where there is always at least one nun in attendance worshipping at the altar. When we visited, there were several nuns, chanting. It was actually a bit eerie (Alba used the word creepy) and it sort of made the hairs on the back of my neck stand up slightly to see it. Nick also admitted to feeling a bit disquieted by the sight.

Some other photos from the tour: 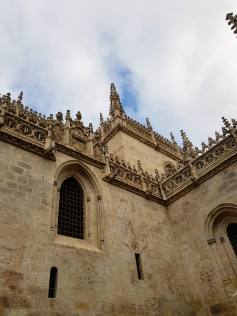 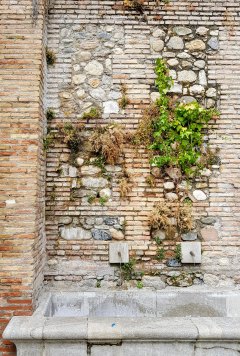 After the tour finished, we had a quick lunch at our faithful Bar Avila II (meatballs and croquettes) then headed back to the hotel and crashed out hard.  I am not sure what it was for me, but I felt like just not getting up or doing anything for the rest of the day.  The only time we stirred was later in the night to go out and have some dinner at a place Alba had recommended called Bar Provincias Granada.

We had some excellent steamed muscles and delicious fried fish.

We then had a cheeky dessert at Astro Crepe, a weird little creperie with an art gallery attached.  They also had a selection of Deadpool comics in Spanish which amused me. 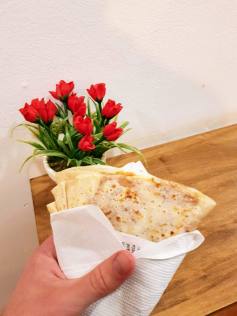 After all this though, it took zero convincing at all for me to climb back into bed and sleep off the rest of the night.  What a day! And tomorrow we would be moving out again to our next destination: Seville!