Our last morning in Naples was rather relaxed.  Since we had mostly packed the night before, there wasn’t too much to be done in the morning and most of the cafes around us didn’t open for breakfast until 9-10am.

Shortly before 10am we checked out of Neapolis Bellini B&B and I mournfully bid goodbye to our lovely rooms there. We also had to farewell the bubbly, quirky lady at reception who I had really adored. She really made the stay quite fun.

Bags at the ready, we started trekking towards the port where we hoped our ferry luck for this trip had changed. But first stop, breakfast.

Centrale del Caffe is a typical Italian cafe where most patrons stand and eat their brioches and drink their espressos at the bar to avoid the table service charge.  But as we were lugging our gear around, I wheedled at Nick until he agreed to sit down at a table anyway.

We did have a REALLY excellent brioche creme and coffee there so I thought it was perfectly okay to sit and savour it.  Though we did miss out on a quintessential Italian experience cause I didn’t want to eat standing ha ha, sorry Nick. 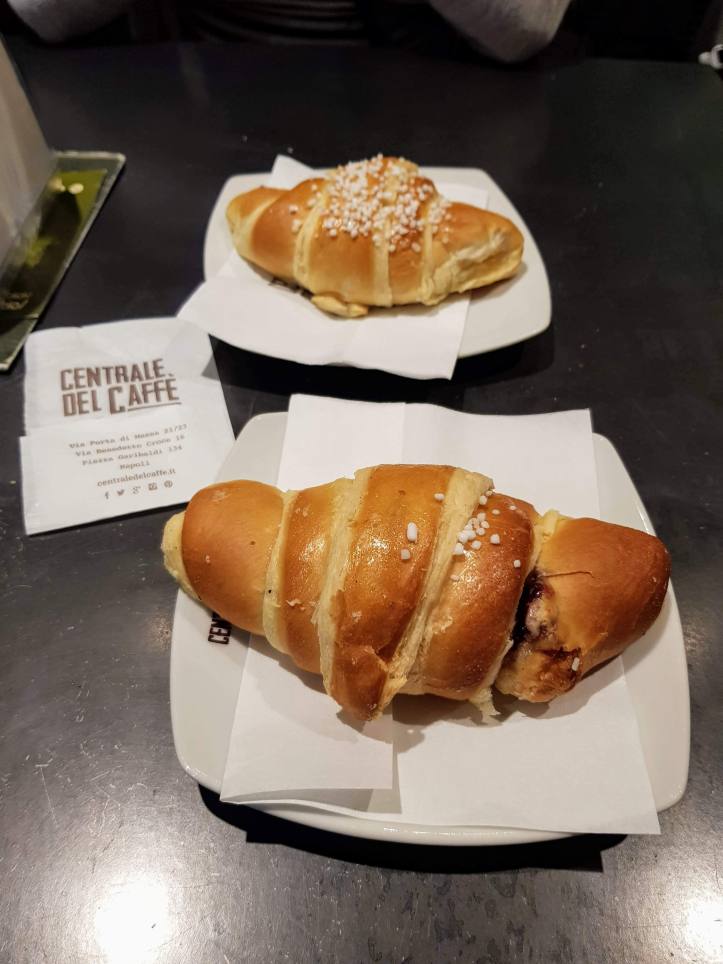 Breakfast concluded, we headed on down to the port and were super glad we got there early as the ticket situation was a little bit confusing.  The first building we found advertised that we could buy tickets to Sorrento but on approaching the desk we were told ‘no – around the corner’.  So we walked out of the building in the direction indicated and came to another window where we were once again advised we couldn’t buy tickets to Sorrento and had to walk another 500m to purchase them.  Thankfully, this third location turned out to be the winner and we got our tickets.  We also happened to be edging closer to our vessel with each hop so it was only a short walk from the ticket office to the actual departure point.

From here on, the ferry luck had changed for the better with boarding the ferry happening on time and with no issues.  The ferry itself wasn’t overcrowded and not only did Nick and I get seats, we go a whole row to ourselves.  The sea wasn’t very choppy and I was able to peacefully read my book for about 40 minutes until we arrived without any drama, at Sorrento. 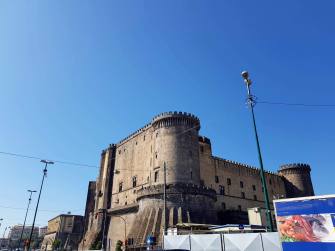 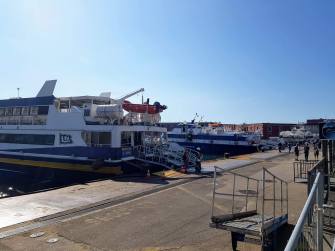 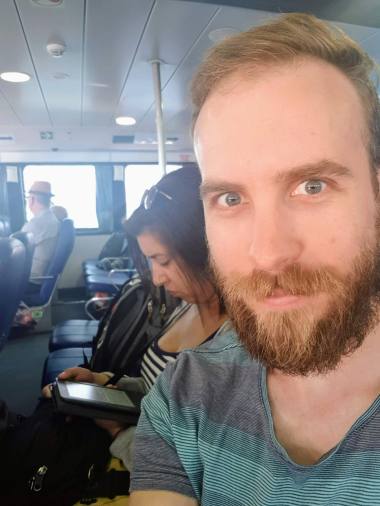 It was just before midday and Nick had a bit of a stroke of brilliance and suggested that we stop at one of the ‘beaches’ to relax for a while.  As neither of us was hungry and there wasn’t much point arriving early to Positano it seemed like an ideal way to kill some time in the warmth of the day.

So to Maremeo Beach we went.  These ‘beaches’ are kind of weird touristy spots at the base of the cliff leading up to central Sorrento.  Privatised and turned into bars and restaurants with a ‘beach’ space (usually with umbrellas and chairs set up on a sunny part of the dock) you could pay for deck chairs or sit in the ‘restaurant’ area in the sun.  We elected to have drinks in the restaurant area and Nick went and changed into his bathers.  He had to exit the ‘beach’ and get in the water from a public space since we hand’t paid for using the ‘beach’ side of the restaurant, but no one minded this at all.  Meanwhile I took pictures and read my book in the sun while sipping a nice refreshing (but hideously overpriced) drink. 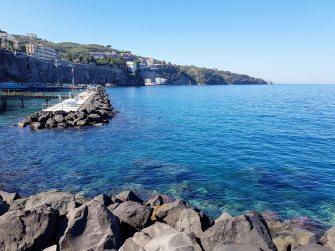 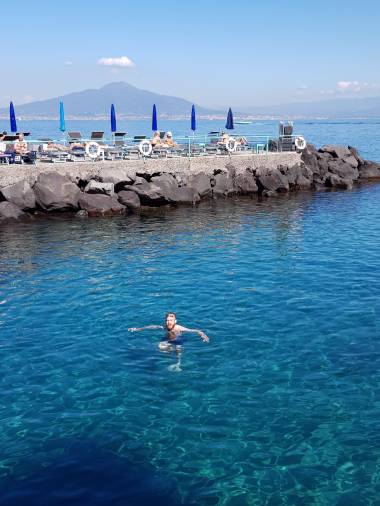 Nick eventually came back in and we just sat and relaxed for a while before deciding to scout out some lunch somewhere we wouldn’t have to auction a kidney. We settled on Bar Rita up in central Sorrento as it was in the general direction of the bus station.

Here we had a chicken salad and a slice of pizza which we shared as well as a small lemon cake which was a nice sweet tasty treat.

Then we continued on to the bus station were we were just in time to catch a bus to Positano. The bus was a little overcrowded but we still managed to nab a couple of seats.  There were some annoying kids on the bus and it was a long and twisty road (akin to the Great Ocean Road back home in Victoria) but only a relatively short bus ride being just under an hour.

Once we exited this bus at Positano, we then had to catch a local bus to make it to our destination for the next couple of nights, Casa Cuccaro B&B located in Nocelle (which is a quiet little town just outside Positano). 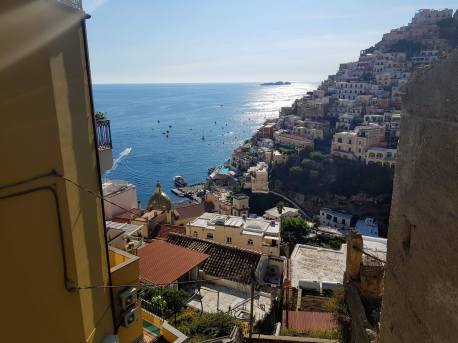 Technically, we could have walked there from Positano but it would have been a LOT of steps (apparently 1700 according to one source Nick read) and I wasn’t game to try that while we still had our luggage with us.

Once we found the B&B though, it was a very simple manner to check-in.  The place is run by a husband and wife team who are very friendly and accommodating. They told us to let them know if we needed anything and then left us to our own devices.

After freshening up, we headed out for a quick explore of the local area and it was quite lovely.  We stopped at a little kiosk called Lemon Point which sells (guess!) lemon drinks and granitas.  I had a lemon, orange and cherry granita which was REALLY refreshing.  We took it back up to our balcony where Nick had a beer and I enjoyed my juice and we watched the sun set on the balcony in a cheery wash of soft colours. Nick spotted a garden of san marzano tomatoes right outside and spent a little while plotting how to break in and eat them all. 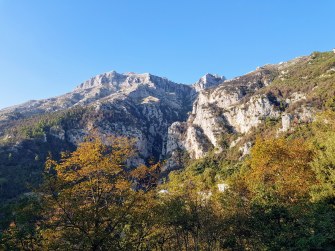 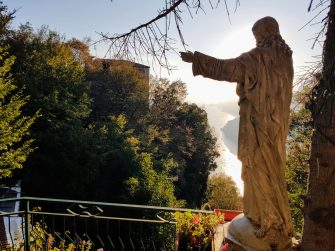 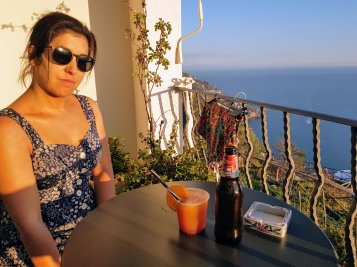 Shortly after sunset, we headed out for dinner at Ristorante Santa Croce which was conveniently located about 3 minutes walk away from the B&B. The restaurant itself was lovely with a large wall of windows which allowed us to see out into beautiful Positano, all lit up at night with street lights.

We were seated at one of the tables right by the glass so this was a perfect vista for our eyes to feast on.  But it was nothing compared to the food we were about to feast on.

Breaking our usual habit, we decided today to also order appetisers because they just sounded SO nice.  We choose the zucchini flowers and a Caprese salad. While the salad was simple, it was obvious that it was made of fresh, locally grown tomatoes. This sated Nick’s lust for tomatoes – hopefully enough that he won’t go on a rampage for them at some time in the near future. The zucchini flowers were likewise sensational.  Stuffed with ricotta and mozzarella and then the flowers themselves were lightly fried (very much like a tempura batter).  Yum!

For our mains, we couldn’t go past the restaurant’s home made pasta.  I choose a gnocchi dish with a tomato and basil sauce while Nick had a seafood linguini which was filled with calamari, muscles, vongole and razor clams.  They were both pretty amazing but I think Nick’s dish just slightly edged out mine. I was glad that we had a light breakfast and lunch today because these dishes were too good to waste! 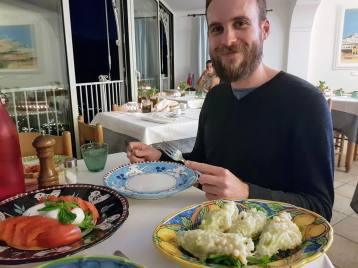 Happily full, we headed back to the hotel to relax after the long day of transit.  Tomorrow we would be participating in an Italian cooking class and also, finally getting to explore Positano!