After a REALLY good night’s sleep we arose to search out breakfast.

This time, we headed even further off the beaten (tourist) track and wondered past the main Oia bus terminal in search of a bakery Nick had researched for breakfast.

Fourni Bakery was full of enticing cakes, slices, pies and more.  It was VERY hard to pick two things to eat but eventually we settled for a flaky filo cheese pie and a slice of lemon ‘pie’.

The cheese pie was filled with a salty, cheese mix.  Maybe halloumi and feta? Nick said it was pretty rich for breakfast but I was all for it.  The lemon pie though was something else.  It was more cake-like in actuality, but it was soaked in a syrupy lemony mix and there was a silky, smooth glaze on the top of the cake also.  This was to die for.  Basically my favourite sweet we have had in Greece so far!  With a couple of excellent coffees to go with, it was the cheapest breakfast we have managed so far.  Will definitely come back here tomorrow (also ideally located next to the bus station for when we head back to Fira). 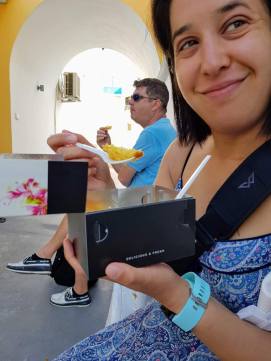 The face of happiness

After breakfast, Nick had decided that we should check out Amoudi Bay during the daylight hours.  Last night on his walk he had seen this area of Oia beautifully in the dark. Though, as he later admitted to me, he was stumbling around walking down the staircase with only his phone light to guide him.

I agreed that it would be nice to check it out but man, I wasn’t prepared for the stairs leading down. With markers indicating that there were 300 steps, I baulked slightly, but we had come this far. The steps were actually quite wide, allowing traffic in both directions, but they were pretty uneven. In some areas, you could walk down like normal stairs, but in others, I was taking 6-7 mini steps, trying to control my descent cause it was quite steep!

But we eventually made it down and walked around the small area.  Unsurprisingly, there were several seafood restaurants right by the waterfront.  Some of the chairs and tables were incredibly precariously placed right by the water’s edge.  There were a few seats we saw that would only take a nudge of a couple of cm’s to have one of the legs falling over into the sea. Presumably followed by the luckless diner. You would not see that in Australia.

The waters were beautifully clear, turquoise and lovely, you could see the fish swimming in their schools.  We wondered around the path for while before beginning the MUCH more harrowing task of making our way back up the stairs.

On the way down 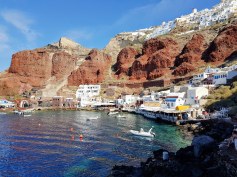 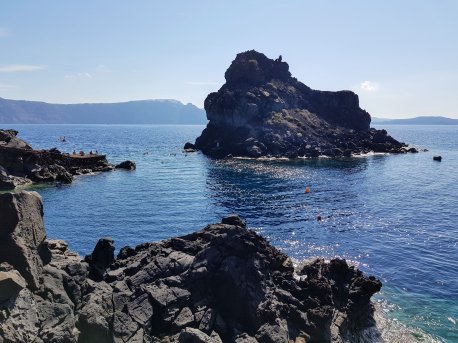 Beautiful flowers on the stairs

I won’t lie, this absolutely KILLED me.  I am not sure why as it wasn’t nearly as steep as the path up to the Thera ruins we scaled a couple of days past.  But we were only maybe halfway up and there was sweat pouring off me and I was ready to lie down and die. Happily, I did make it in the end but not without quite a few rest stops in the few shady areas around.

After all that walking we headed back to the apartments to shower off (in my case, I needed to get freshened up after all the sweating) and we packed for our afternoon activity – a sunset cruise with Capt Ted’s Santorini Sailing company.

“Happy is the man, I thought, who, before dying, has the good fortune to sail the Aegean Sea” – Nikos Kazantzakis

This cruise sounded like it would be a lot of fun – swimming for Nick, hot-springs for me and a BBQ dinner at the end.  Happily, the cruise did not disappoint.

We were picked up near our hotel by a minivan and stopped along the way to pick up a few other passengers. Our route took us through Oia and eventually though Fira where we passed by at least 2 of the hotels we had stayed at! We even stopped outside our original hotel, Stella Apartments, to pick up some other cruise travellers.

We eventually on-boarded the Dream Catcher at Akrotiri beach.  We traversed the caldera side of the island and actually stopped for swimming at the volcano island where the hot-springs were located.  As many others pointed out, it should more accurately be called “warm springs” as the thermal waters were quite interspersed with the cooler ocean water so it wasn’t hot by any stretch of the imagination.

Nick was even shivering as he came out of the water though I would have thought he would have worked plenty hard enough shepherding and, at one point, dragging me through the waters to keep up with him.  But apparently not!

When we got going again, we passed by Fira.  It was very different looking at it from the water rather then from the cliffside looking down.  We tried to spot where Phil’s hotel was and failed ha ha.

The next stop we made was to a point very close to Oia’s Amoudi Bay where we had been that morning.  Nick decided to get out and swim for that one, but I elected to stay on the boat. Again, Nick was very cold when he got out, but he seemed to be having a great time in the water. The captain told us that the waters around Santorini island were deep.  As in, uncharted deep.  Some areas you could see the bottom, but others were a straight plummet to the depths which no one has ever seen before.

After this, we headed back to the original boarding point where we jumped out to have a BBQ dinner.  It was actually surprisingly good – with BBQ pork and chicken, tzatziki, bread, olive dip, pasta and Greek salad.  Nick and I had both worked up an appetite with Nick managing his customary two plates (when given the choice, he is always up for a second plate).  It probably wasn’t helped by us skipping lunch but we were ravenous.

Once everyone had dined, we jumped back on the boat and passed by the white sand beach.  I was surprised at this one as I hadn’t thought Santorini had any white sand beaches.  As the captain explained, this one was formed from limestone rocks, giving the sand a much paler colour.  The white sand beach is only accessible by boat however and there are zero amenities or vendors on that section.

We then passed by the red sand beach.  Again, one of the crewmen explained that this beach got its distinctive colour from iron deposits. This beach has been officially closed since 2014 due to all the rock slides – evidence of which could be seen from the boat where we were safely ensconced.  However, people would still visit the beach and we could even see some tourists heading down the cliff path towards the beach.

While we were doing these sight-seeing stops, the sun was setting around us, surprisingly giving us one of the best Santorini sunsets we had ever seen. There were golden hues dissolving into scarlet and eventually mauve and indigo skies.  It was quite spectacular.

Once the sun had set proper, we headed into one last small commercial port called Blychada where we disembarked and then were herded into minibuses to take us home.

The drive was uneventful except for when Nick said we were close enough to our stop in Oia and we tried to get off the minibus.  Our driver shooed us back into the bus and drove the last 100m down the road before letting us out.  It was a little moot as we then had to walk 50m back to get to out hotel but it was slightly amusing to me at the time.

We showered and packed up our gear ready for departing Greece tomorrow.

Tomorrow: On to Verona, Italy!