This morning saw us waking up late and checking out of the Villa Galatia apartments and walking our luggage to the last accommodation of our Fira stay, Costa Marina Villas.  We left our bags at their reception area with the intention of checking in properly later in the afternoon.

This would save us having to lug the heavy stuff with us as we explored more of Santorini island as we planned today.

We stopped for breakfast at a cafe called Magma City Cafe (side note: loving all the volcano theme named places). This place rated really well on TripAdvisor, but Nick and I were both not entirely impressed with the breakfast selection on offer.  However, having said this, I am sure this is a product of our Melbourne hipster status rather than any fault of the cafe itself. The Greek omelette Nick ordered and the waffle with chocolate praline that I had were very good and filling. 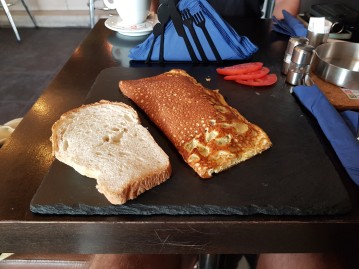 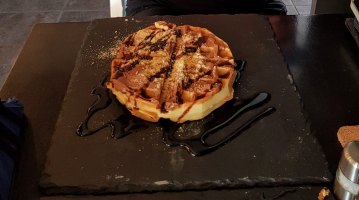 An observation we made over breakfast though was that no cafes in Greece seem to serve toast.  You get bread with every meal but not toast.  I had been planning to order the continental breakfast which bascially was coffee, juice and marmalade on bread… but I couldn’t imagine eating marmalade on anything other than toast!  Bit precious of me? Yes. But then again, choosing between chocolate smothered waffles and marmalade on bread isn’t too tough of a choice. …I’ll try to do better with my breakfast choices from now on.

Once we were finished with breakfast, we meandered down to the bus station in Fira, intent on exploring more of the island and checking out one of the famous black pebble beaches, located in Kamari.  This was an easy bus ride away.

I wasn’t honestly sure what to expect from the buses in Santorini but they were clean, air-conditioned and very comfortable.  More so that some taxis we have taken so far here. And most certainly much, much, MUCH cheaper. So much in fact that Nick and I will try to do all our transfers via bus from here on, including getting from Fira to Oia and then from Oia to the Airport on the day we depart.

It probably only took about 15 minutes to get to Kamari where we initially decided to do a small tour to the nearby ancient Thera Ruins.  Unfortunately, when we arrived at the booking office, we discovered that counter to what the internet advised, the tours didn’t leave on the hour, every hour but only departed twice a day – 9:30am and 10:30am.  We had missed the tour by 15 minutes. We decided that in the shoulder season, they must run to a much more limited schedule then what their website says but it was just a little unlucky.

However we weren’t at all fussed about the change of plans and decided that we would spend the morning walking the beach of Kamari.  For context, Kamari is a town located on the south-eastern coast of Santorini.  Its apparently named after a natural arch formed along the beach called Poseidon’s sanctuary.  Nick and I hiked up to that arch though and its not really a sanctuary for anyone except graffiti artists and horny tourists/young people (the latter of which was in evidence when we were looking around).  There is also a church very close to the arch which was in better condition. 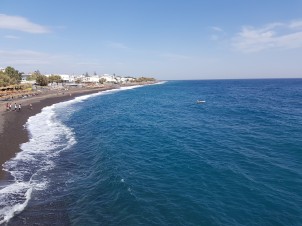 The morning was deliciously warm and at some point, Nick decided to take a dip in the water. The waves were much too rough for me though so I opted to watch him body surfing from the safety of the shore where I nerdily picked up all the beach pebbles and compared them.  There’s some thing a little cool about volcanic rocks – some are as smooth as glass and others take on more pumice like qualities and are light and almost ‘foamy’. I haven’t seen much black pumice before so it was quite cool to see. 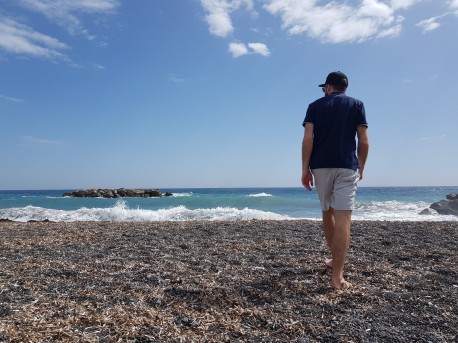 Striding to the sea 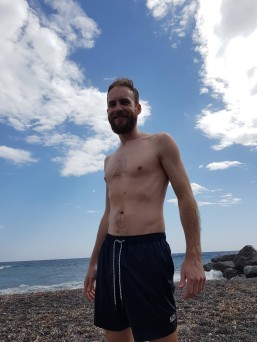 Nick was incredibly bored by my preoccupation with the pebbles. “Carla…they’re just rocks”. Yeah sure.  But science!  Nick air dried in the sun and we decided it was high time for some cold refreshments.  Nick chilled with a Mythos beer while I sipped a soft drink at the Prince Restaurant Lounge Bar which overlooked the beach and the waves.

I’d like to say we picked the place for its views – but really, it was one of the few places that wasn’t trying to sell a beer for €6 (Melbourne prices basically). At this place at least, the beer and the soft drink prices were on par – though probably still a little on the expensive side.

Similarly, we had to wander around for a while before finding a place that would sell us some gyros for less than €10 (in Fira, the gyros are €2.50) – eventually we found a place that didn’t do ‘tourist’ prices and happily settled to eat some lunch at SouvLike.  Nick had another cheeky beer and then we were jumping on a bus back to Fira. 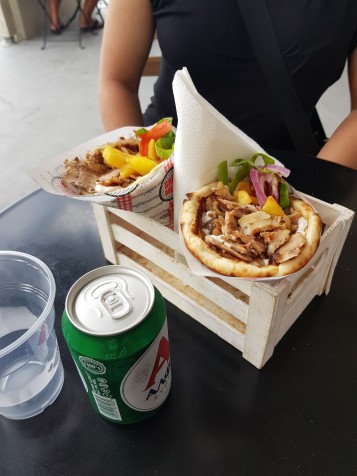 Once we arrived at the bus terminal, we decided to explore a bit more of Fira before heading back to the hotel for a rest before dinner. We found the iconic Santorini postcard view of the Three Bells of Fira, which is part of one of the many Catholic Churches on the island. The view from over the church out to the sea was spectacular. 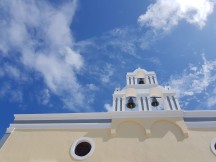 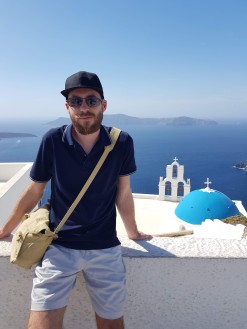 We then headed back to check into the hotel and were happy to each have a shower and change into clean clothes before having an afternoon nap.  A word about the Costa Marina Villas.  This is actually the favourite of all the places we have stayed in Fira so far for me.  Location wise, its excellent, only a 5 minute walk from the Fira town centre and other attractions.  Our room has a lot of character and is open and bright.  I really love the tiles they have used in the bathroom and its the first place we have stayed in which has a rainfall shower-head, and most importantly, no shower curtain. I hadn’t realised how much I had been hating a shower curtain sticking to my legs or back while I showered honestly. Its also quiet and tranquil with many flowers blooming in myriad colours all along their gardens. 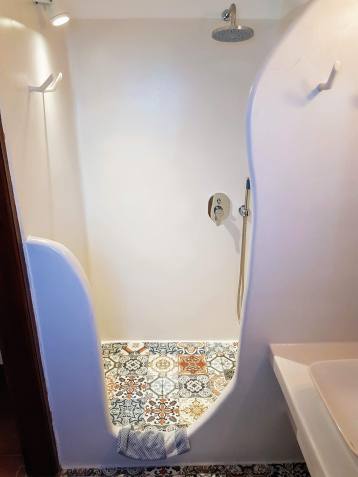 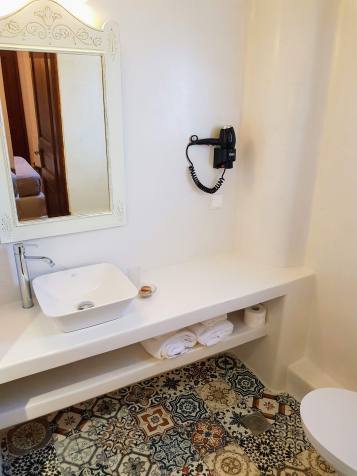 Rested, clean and happy, we headed out to a local mini-mart and grabbed a couple of cold drinks and made ourselves a chip platter which we ate happily in the hotel room.  After a bit of blogging and research, we decided to try a restaurant that one of my friends who had recently visited Fira recommended on Facebook – Kyra Niki Taverna.

This was a bit of a walk (about 15 minutes) from our accommodation but the fact that it was out of the way hopefully meant that we would be able to get a table since it would be off the main ‘tourist’ map. Unfortunately for us, while it was off the tourist map it seemed to be firmly on the locals map and the entire place was booked out. We resolved to try again for lunch on Monday before shipping out to Oia as they would be closed for business tomorrow.

We wondered back to Fira and instead, choose perhaps our only meat-free, vegan meal.  FalafaLAND.  As their name suggests, they serve up freshly made falafels.  We ordered a falafel box (six falafels, tabbouleh pitta chips and a minty yogurt sauce) and a Greek salad as we needed our vegetable intake. While the food was good and filling (though the tabbouleh was quite bland) I wasn’t really that impressed with it.

However, with marks under the belt (so to speak) for healthy eating, we decided to rewards ourselves with some chocolate gelato from Solo Gelato in the Fira main square. I am not usually  the biggest fan of gelato/ice cream in general, but woooooow this was fantastic.  Nick and I got a single scoop in a cup to share and it was just as well as it was so decadent and smooth.  It was like eating an ice cream version of chocolate mousse.  Again, it was just a little bit, but it was exactly the right amount to cap off the night. 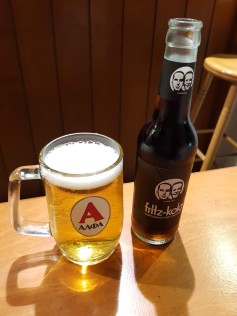 Beer and Kola at FalafeLAND 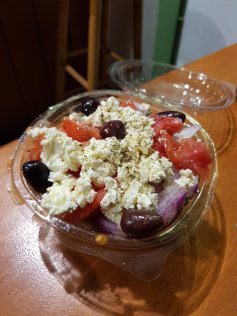 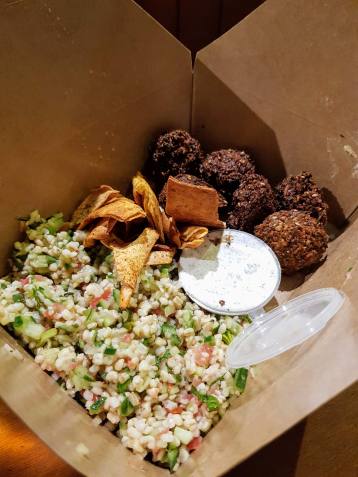 Have you ever seen a happier girl?

We wondered for a while longer, taking in the night and the sights of Fira before heading back to our hotel to turn in.  We had designs on making a successful trip to the ancient Thera Ruins tomorrow and that meant and early start.

Early to bed, early to rise.  Hoping that we have energy for the hiking tomorrow!