Waking up this morning, we could see the wind hasn’t abated much so didn’t hold out much hope of the ferries running. This fear was confirmed in short order as we got a text from Phil’s group whose hotel reception let them know that the ferries had indeed been cancelled for the day.

With not much we could do immediately, we decided to grab some breakfast before figuring out what to do about our situation. We wondered down to Bloom Greek Deli Room and had a simple breakfast of savoury pancakes and scrambled eggs.  The pancakes were some of the best I have ever eaten and Nick enjoyed the freshly squeezed orange juice that came with his meal also. 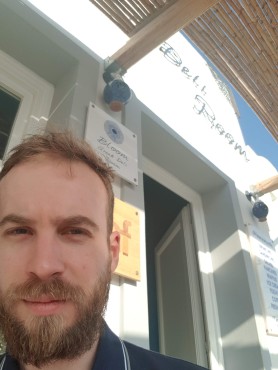 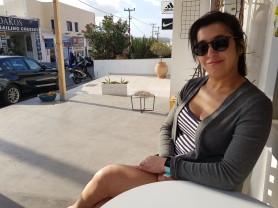 After this rejuvenating meal, we headed back to our hotel and checked with reception about their availability for the night. Unfortunately, while they had a couple of guests transiting from Mykonos who they were pretty sure would not be able to make it due to the ferries not running, they couldn’t release us a room so we had to book a new suite at a different hotel, Villa Tania – the girl running reception at Villa Fotini actually called and checked their availability for us before recommending them as an option for us.  The service there had been pretty fantastic and I was sad to leave!

We went ahead and booked Villa Tania as we didn’t want to worry about where to sleep for the night.  We were only able to check in at 2pm  and it was very much too early. So we checked out of Villa Fotini and wondered down to Phil’s again – they had managed to extend their stay successfully.

We basically spent the morning to late afternoon with them.  Nick played a card game with Phil, JB and Beth while I read my book.  There was a bit of amusement as the others tried to coach Nick through the rules of the game and then he ended up winning with a pretty wide margin. Eventually we decided to get a lunch of gyros (our gyros a day!) and decided on the activity for the afternoon: Wine tasting.

Since there were 6 of us, we would need to book a mini-bus which one of Phil’s group organised through their hotel reception.  The driver, who didn’t speak much English, got lost a few times and hilariously stopped a few other drivers to ask for directions on the way.  However, even considering this, it didn’t take us very long at all to arrive at the winery.

Our end destination was Vassaltis Wineries, actually located in Oia, where we did a wine tasting of five wines accompanied by five amuse bouche which were artfully arranged on a slate serving plate.  The winery is the newest on the island and also has the distinction of being founded by the youngest winemakers – however, I don’t think this affected the quality of the wine-making.  The name of the winery translates to “basalt” in English and is a tip of the hat to the volcanic rock that is associated with Santorini.

The different wines were each lovely, all made from grapes indigenous to the island which was surprising.  The island didn’t really seem capable of supporting enough plant life to sustain a winery, but there are apparently about ten wineries on Santorini so that shows what I know about grapes and agriculture really.

We tried four white wine varieties, a mix of blends and ‘pure’ white grape varieties, and one dry red.  Of these five, one was a limited bottling – they only made 1000 bottles of the vintage so it was quite interesting. They seemed to be highly aromatic wines as well – but I have just hit the extent of my wine knowledge here and will be the first to admit my wine palate is not the most refined. 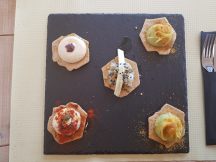 It was  fun way to spend a few hours and when we returned to the town centre, Nick and I collected our bags from Phil’s rooms and walked to Villa Tania where we were going to bed down for the night.

Villa Tania is nice but the room is a shade on the small side and there was only a twin share room available, however, beggars in this case, can’t be choosers. The owner was lovely and though she didn’t speak a lick of English, coached us through the workings of the room and the hot water system for the shower. I had joked at one of our previous stays that the room boasted “24-hour hot water” as a feature, but it seemed that I actually had been taking hot water for granted! However, the hot water system was solid and there was plenty of hot water for both Nick and I. 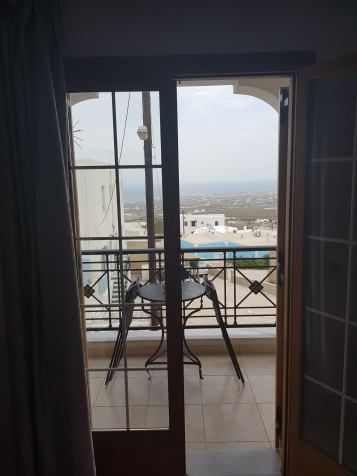 We are still waiting to hear if the ferries will run tomorrow and at this time, everyone is a bit unsure.  We were unable to book another night at Villa Tania and so booked a night at a new hotel, Villa Galatia. This would bring us up to four hotels in four nights!  But this is how you roll when travelling sometimes. Nick had a nap, I did some writing and eventually, we headed back down to meet up with the group for one final dinner together.

Dinner for the night was at a fish and chips place, To Honaki, which served up mammoth amounts of seafood and chips in a paper cone.  Very cutely, the cones are wrapped in faux newspaper for that old-school fish and chips feel.

We also ordered a salad for the table and every type of sauce available to go with the meal.  One of the popular ones was the garlic sauce which was pretty much a garlic paste but excellent on fish.  Nick had the cod (lightly battered and fired) and I had the fresh calamari. 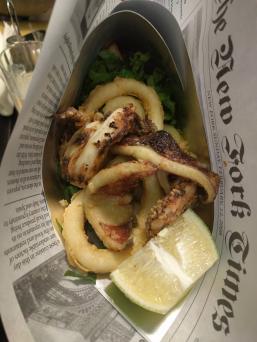 After dinner, the group broke up again as Phil and co. would need to pack for their departure from Santorini tomorrow (assuming all went well with the ferries) and we would also have to pack up for our new hotel transfer the next day.  With rain forecast for the morning, but a warmer day overall then we had seen so far, I was excited for the next day in gorgeous Santorini.