Waking up this morning well before the crack of dawn was surprisingly easier than expected.  With all our clothes laid out and everything else packed and ready to go it was a simple matter of heading to the Penthouse and checking out.

Then it was goodbye to the Felix hotel and hello to our Emirates Chauffeur. He arrived basically on time and was quite amusing all the way to drop off at the Sydney Airport Terminal.

From here, we did have to make a choice.  Qantas First Class Lounge, or Emirates Business Class Lounge?  While I had been pretty excited to check out the first class lounge, unfortunately, it didn’t open until 5am, so we decided to bypass it and go to Emirates which was just outside the gate we needed and meant we could just relax until it was time to board.

Nick snagged a shower while I grabbed a much needed cup of coffee and some nibbles at the lounge buffet.  Nick followed suit when he joined me and we killed a very short amount of time before we were advised that we could board the plane. 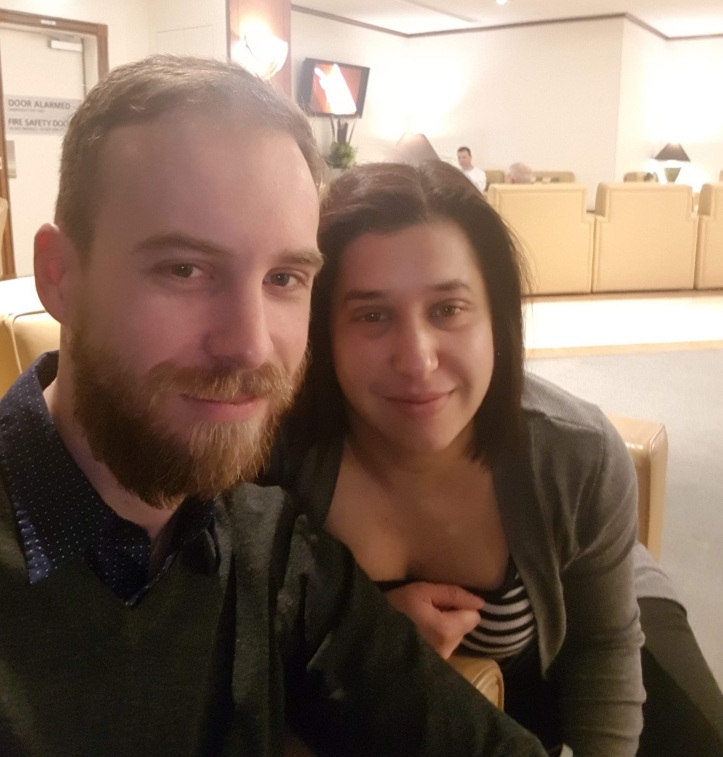 Now kids, let me tell you.  First Class is different. Even boarding the plane, you get to use a different entrance from all the other plane-goers and there are only about 14 seats in the whole section. But the seats are actually mini-suites, complete with privacy screens and the seats convert into fully lie flat beds.

Aside from the crazy amount of space you get, you are basically bombarded with free gear and snacks.  Each seat has its own dedicated juice and soft drink bar, a vanity mirror which contained some fun goodies, Bvlgari amenity kits (gender specific, even down to the case), pyjamas and even a snack basket. 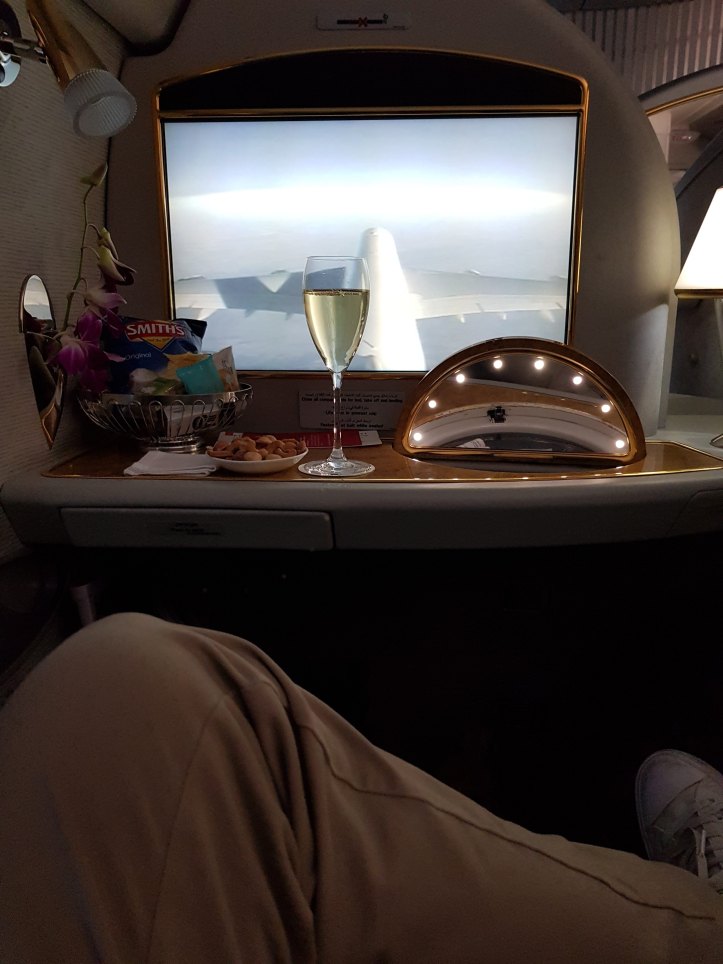 The entertainment units were also pretty snazzy with a large central touchscreen, an iPad like dock-less unit that you could use to control the main-screen, privacy screens, lights and the seat and also a smaller handheld controller… it was madness.

We were asked if we would like a glass of Dom Perignon champagne after we were seated.  I demurred as, c’mon, it was still in the hour of 6am. But Nick talked me into it. So – drinking expensive champagne before decent humans are even awake is now checked off my bucket list. It actually came with a delicious bowl of hot salted almonds, cashews and macadamias, which really helped the bubbles go down. A bit too much perhaps.

Once we were underway, our champagne glasses turned into a champagne breakfast with top-ups of the fizzy ferment as well as a surprising delicious cheese and chive omelette for me and a serve of gingerbread pear french toast for Nick. These breakfasts were both accompanies by a small fruit plate, yogurt and a bread basket.

It was after breakfast that my affinity for awkward struck and my suite started experiencing technical difficulties. It seemed some issue with the wifi kept causing my entertainment system to crash.  While that didn’t bother me too much, my real issue was that the system crashing meant that I couldn’t adjust my seat or use the privacy screen at all.

After the staff tried to reboot the system a couple of times, they ended up relocating Nick and I to a couple of new suites. It was lucky that it was a relatively quiet flight (only 7 people in first class) so Nick and I could still sit together.

At some point, I did have to use the First Class bathrooms and man… the bathroom on the plane was almost as big as the bathroom at the Felix hotel we had stayed at the previous night. Which isn’t to say the hotel bathroom was small. More that the bathroom on the plane was ridiculously huge. It was also stocked with some premium luxury toiletries.  But the icing on the cake was that each toilet also had a contained shower cubicle which the passengers could book time slots of 25 minutes on.  I don’t think I really needed to have a shower on the plane… but as it was on offer, I thought it could be another weird experience to check off the bucket list. I signed up for a slot towards the end of the flight so I would feel fresh headed into the UAE. 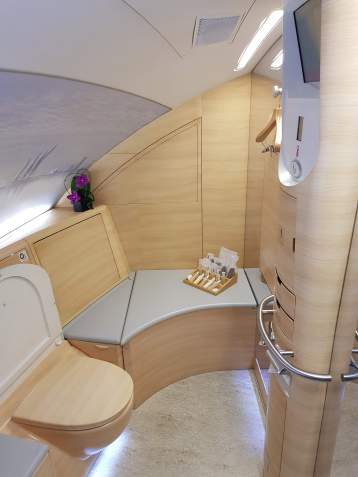 I also took the opportunity to change into my pyjamas and had my seat made up into a bed.  By the time I got back a comfy mattress had been fitted to my seat and a pillow and fluffy blanket provided.

I settled back and stared at the starry cabin roof for a while, but even amongst all that luxury, couldn’t quite get myself to fall fully asleep. I only managed a drowse for a couple of hours.  I think it was more to do with my body telling me it was 9am and didn’t I want to actually be awake at that time rather than trying to sleep?  After a while, I gave up the pretence and just read my book or watched a movie.

Nick and I both tried to hold off on eating for as long as possible and so it was much later that we decided to get some ‘lunch’ though it was closer to 3pm AEST than anything resembling lunchtime.

Because, First Class, we both ordered the caviar appetiser which came with accompaniments of chopped onion, sour cream, lemon and grated boiled egg which you could have on tiny cute blinis or melba toast. There were also canapes of confit duck with curried pineapple, parmesan and truffle arancino and a cute poached prawn and guacamole tartlet (which was my favourite).

Somehow, after all this (and Nick also helped demolish half my bread basket) Nick also got a cheese board for dessert which had a selection of cheeses, soft and hard and some lovely accompaniments. Nick also had a cheeky glass of port that the flight attendant recommended to go with his cheeses.

Now, aside from the couple of glasses of champagne when we boarded, I was not really going for the alcohol.  I was really trying to stay hydrated this trip so my skin wouldn’t flare up with eczema like it usually tries to when I fly. Nick however, was under no such restrictions and imbibed not only the same amount of champagne, but also a few glasses of wine with lunch, his port and a cheeky espresso martini a little later into the flight.

Not too surprisingly, he ended up hard napping for a while.  This is what a happy travelling Nick looks like.

A couple of hours later, I succumbed to my sweet tooth and ordered the chocolate mousse that was on offer. It was not really a traditional chocolate mousse however, being not very chocolate-y flavoured and very creamy instead, but it was still satisfying.

Nick also managed to sneak in one more snack of pan-fried gyoza towards the end of the flight.

The flight seemed to really go quite quickly overall and before long, we were advised that the shower suites were ready for us.  This was a pretty unique experience.  You were given 5 minutes of running shower water in a 25 minute slot in the suite. This really encouraged a “navy shower” where you get wet, scrub up and rinse off. Honestly though, I am someone who luxuriates in a nice shower and even for me, 5 minutes was plenty of time.  I even washed and conditioned my hair!

After drying off with the warm fluffy towel left for me and even using the installed hairdryer (which admittedly, was pretty weak) I re-dressed into my original clothes and headed back to my seat where a small, refreshing fruit plate awaited me. 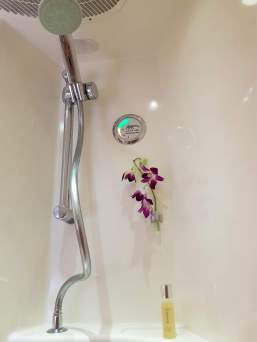 Nick managed to sneak in one more cheeky dessert and soon after, we were descending into the UAE.

It was a toasty 41 degrees celsius at Dubai and we could feel it as we were disembarking the plane in full force. It was short lived as we were soon back into the air conditioned terminal, but it gave us an indication of how the next few days would be in the city.  Hot.

Generally, I consider airports old hat but the airport at Dubai is infamous for its poor signage. This and the overall lack of sleep Nick and I have had over the last 24 hours led to us accidentally heading to the connecting flight area instead of the immigration and customs area of the airport.

It was a minor thing really, but it left both Nick and I a little stressed and more exhausted. We were happy when we eventually backtracked, asking directions of a couple of staff, before finding our way properly to a train sub-station in the airport and heading to customs.

Now back on track, we exited the airport without any further issues and found our driver who dropped us off at our stay for the next couple of nights.  The Coral Al Barsha Hotel. Our driver did spend a fair bit of time on the phone asking for directions to the hotel but once he had his bearings, he did point out several of the really interesting buildings and marvels Dubai has to offer. But it wasn’t long at all until we arrived at our destination. 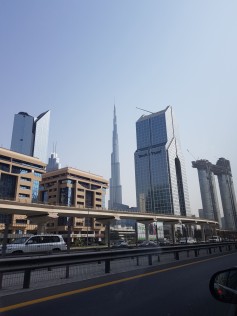 The Coral is located within walking distance of the Mall of the Emirates and the Metro train system which will eventually take us back to the airport. For its location, its again, a very competitively priced stay and the room we eventually checked into is large and clean.

After decompressing for some time and struggling to stay awake, we decided to skip dinner and instead have a large breakfast the next day.  We also planned some of the activities for the next day, keeping in mind that it is going to be scorching and we are going to very likely be tired! Despite our best intentions, it is going to be a relatively early night.