Note: pictures and the short video on this post were taken by the very talented Allsorts Pictures and I have marked their work accordingly.  See more of their work here:  http://www.allsortspictures.com.au/blog/sam-thoren

This morning saw us waking up VERY refreshed after what was almost a solid 10 hours of sleep.  Early bed + sleep in = winning at life.

Nick looked and felt much better this morning, resuming his normal colour and appetite. This being the case, we hastened down to breakfast to get something to eat.

Post breakfast, we decided to just relax by the poolside until my dad showed up. Predictably, he was late but in the end it didn’t really matter.  It did mean that I didn’t have enough time to get my hair done. It would have to remain its glorious mess of curls in the Bali humidity.  I’d make it work.

Nick, dad and I had lunch together by the poolside and just generally relaxed before we had to go and get ready for the wedding.  Transport had been arranged for hotel guests to the venue so we just had to be dressed and ready to go by 3:30pm.

Nick looked great in his khaki pants and white shirt. I was spiffy enough in my print dress and my dad looked very presentable in a blue pinstripe shirt and blue pants.

We headed down to Aunty’s Steph and Uncle Alan’s villa at 3pm.  Aunty Steph was adorably nervous but she looked great as the mother-of-the-groom should. We walked them to the hotel reception area where we were picked up by the taxis and shuttled the short distance down the road.

Initially, I had thought that Nick and I would walk as it was only a kilometre away but, given the heat at this time of the day, Nick would have been sporting some attractive sweat stains and my makeup would have been reduced to a puddle on the floor. Thus I was happy to have a taken a taxi and the cost was only $0.50c per car, so it was a no-brainer really.

The venue, when we arrived, was set up sumptuously. With a very large garden/lawn area and an area which met the beach it was a lovely location for a wedding.  At the beach side, the chairs were set up for the wedding guests to watch the ceremony which would be held on a high stone dais facing the waves. Each chair had a lovely cloth fan which served as a wedding favour for each guest (and came in handy to keep us all cool!).  There were about 8 tables set up on the lawn area closest to the entrance which would serve as the dining and stage/dancing area later.

Nick and I availed ourselves of the lime and mint spritzers before each having a mojito or a beer.  We chatted with my assorted family members and caught glimpses of the wedding party who had been sequestered away.  I also had a bit of a chat with Sam’s grandmother who was a lovely sort of lady.  Sam’s charm must be a genetic trait.

There was a lovely cool breeze coming through at intervals and the crowd was full of anticipation and happiness.  The perfect atmosphere for the upcoming celebration. Guests primed, it was soon time for the ceremony to get underway. 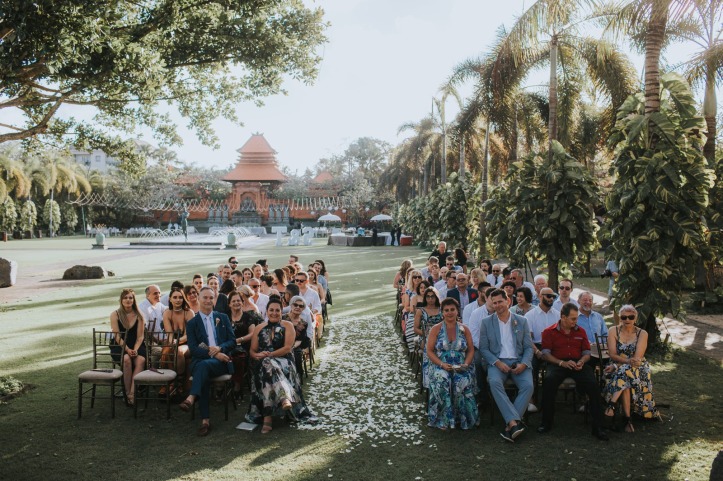 The bridesmaids and groomsmen all looked resplendent in their matching outfits (we would later find out that one of Sam’s relatives sewed each of the bridesmaid’s dresses and her mother made the bouquets out of silk flowers herself).  But good as they looked, they were outshone by Thoren and Samantha, both of whom looked more gorgeous then I had ever seen them.

Sam and Thoren had chosen to have a celebrant officiate and have a member of the Catholic church of Bali consecrate the wedding. I thought the celebrant was wonderful as she engaged the crowd and really made us feel apart of the ceremony.

The couple had written their own vows and wow – I had never known my cousin Thoren was such a romantic.  His vows had me in tears and Sam’s vows only made me more emotionally overcharged.  There were actually very few people who weren’t crying or close to crying.  Even Nick agreed that the vows were very nicely done (though he wasn’t a blubbering mess like me). With those sorts of lovely sentiments going into their marriage I feel there won’t be anything they can’t do together. 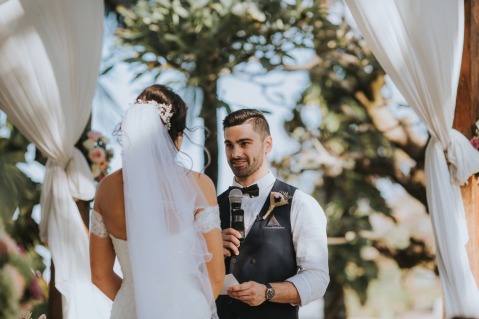 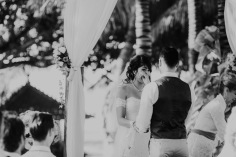 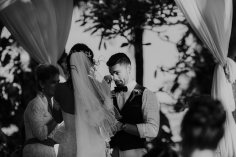 The ceremony was over all too soon and we got to shower the couple in rose petals as they descended the stairs and walked back though their family and friends. 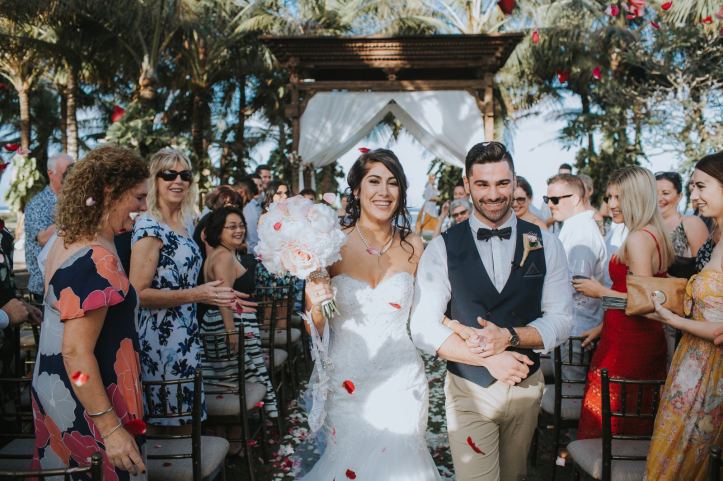 Immediately after this, we had a couple of group photos and then got to nibble on some lovely canapes and be pressed into drinking more and more alcohol while the bride and groom had their obligatory photo shoot. 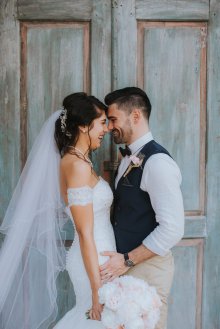 After this, we were all sent towards the entrance to take out seats at our respective tables. Nick and I were seated with various cousins and a couple of partners of the bridal party (one was Dayna, Josh’s girlfriend and the other was a lovely woman named Christine who was the best man’s girlfriend). Mel dubbed our table “the party table” though I don’t think Nick or I did much to contribute to that moniker ha ha.

We then got to see the wedding party make its entrance and I might be biased, but my cousin Jade who did some ‘dabbing’ on her entrance in was simply the coolest.  Sam and Thoren made a dashing entrance once their bridal party was seated and then began the festive part of the day.

Our MC for the night made a brief speech letting us know what was going to be happening the remainder of the night as appetisers were brought around to us. As is usual for a wedding, there was an alternate service of crusted tuna fillet and confit duck ‘done Balinese style’ for the appetiser.  Nick and I did our appalling married couple thing and ate half a plate each and then swapped.

We did the same for the mains of chicken and beef (though my cousin accidentally got served a vegan plate so I swapped my beef for his pasta dish) and then there was dancing with Sam and Thoren busting out some very impressive first dance choreography. The rest of the night was a lovely whirl of cake cutting, speeches, eating, drinking and dancing. There was even time for more romance as our newlyweds lit and launched a massive paper lantern and exited the venue under an aisle of sparklers. It was honestly one of the most lovely days and I was so proud of my cousin and his new wife. 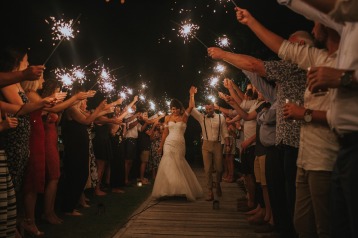 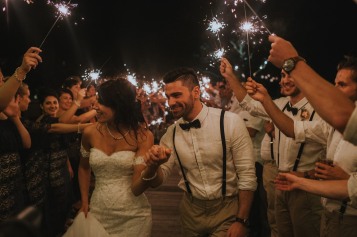 Tomorrow, we would be preparing to leave Bali and head home to Melbourne. Unfortunately we wouldn’t be able to fit much in for Nick’s birthday but we partied hard and had a great time in Bali with Sam and Thoren and all of my extended family so it was definitely a memorable holiday and a perfect wedding.

Sam and Thoren, thank you so much for letting Nick and I be a part of your special day. We loved being there and we wish you all the best. Hope we can share more magical moments with you for all of our lives.

Welcome to the travel blog of newlywed couple Carla & Nick. Join us for our (sometimes) comic adventures and shenanigans. Sometimes we will be flying together, sometimes solo. But always, we will be Soar-ing above the clouds.
Join 19 other followers
Loading Comments...
%d bloggers like this: