Waking up this morning was torture.  I am so not used to 5am starts anymore.  One good thing is that here, its pretty much full daylight around 5:30am so that helped us get into gear and moving. Happily, the storm of the previous day had blown over.  It was overcast, but no longer raining.

We breakfasted on the onigiri (rice balls) and iced coffee Nick had bought the previous day before heading downstairs to catch our shuttle bus to the airport.

At this point, Nick and I really know our way around and airport.  Still, this didn’t stop Nick accidentally trying to take a full bottle of water through the security check, tsk tsk ha ha.  Even this minor hiccough didn’t stop us breezing through security and the passport checks into the main departure terminal.

Here we spent up the last of our Taiwanese dollars on stupidly overpriced Starbucks breakfast and coffee. I had a ham and cheese toasty (which was actually very tasty despite its over-pricedness) and Nick had a ham and cheese croissant.  The coffee was nuclear hot and we had to wait ages for it to cool down enough for us to drink but we had plenty of time to do so.

Once we had relaxed a bit, we headed to our gate for boarding.  Again, we were pleasantly surprised by our low-cost carrier, Hong Kong Airlines as we actually boarded on time and set off on time as well. In further surprises, we were also served an in-flight meal.  It was a weird one, being a rice burger (exactly what it sounds like) filled with ginger pork with some random chicken pieces on the side.  There was also a raspberry cake on the side which was similar to raspberry tartlet biscuits at home.  Despite the oddness of the meal, it was actually better then our economy Cathay Pacific breakfast if you can believe that.

The only marks against this plane that I could note was that my seat wouldn’t recline for long (it kept reverting to its upright position) and that the entertainment system, though present, was malfunctioning so we couldn’t use it.  Everything else was pretty good – Nick had enough room for his legs and the flight itself was pretty short.

All too soon, we were making our descent into Hong Kong where we again disembarked quickly and made it through immigration with no hassles. Being the flight savvy people we (now) are, we grabbed an immigration card each and filled it out while we waited to get through the line. We made friends with a very sweet Canadian girl who lived in Taipei who was on her way to visit home via a small stop-over in Hong Kong.

Having carry-on, we also were able to just walk out through customs with zero drama.  I am telling you; we now know how to airport correctly. We have the system down pat!  I am so impressed with us! Ha ha.

Getting to our hotel was also pretty easy.  From the airport, we caught an express train to Hong Kong station and changed there to a local metro line to get to Mong Kok Station which was literally directly across from our hotel for the next few days, the Cordis Hotel.

The Cordis is a re-branding from the Langham hotel line but it has been recently refurbished – the lobby looked bright and inviting. Check in has always been a bit of a process in Asia and today was no exception however, as our receptionist, Jocelyn was excellent and managed to get us checked in early we can’t complain too much this time. It was also extremely busy with several people annoying Jocelyn as she was trying to process us.  I really think she did a great job for us.  She also apologised to us several times for ‘taking so long’ as she wanted to get us a really good room to celebrate our honeymoon.  She also gave us a gift from the hotel which was a scented votive candle which we will take home.

Once she had us processed through and we headed up to the room we were completely satisfied with our home for the next few days.  It is bright and pretty though there is another weird “can see into the bathroom from the bedroom” oddity.

We decided that we would get some lunch and explore the neighbourhood after we had settled into the room. We headed across the skybridge to Langham Place – a massive 13 level mall which we had come through to get to the hotel. 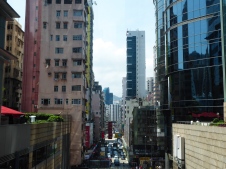 We visited the food court here and Nick had a creamy Singaporean Laksa while I had a Japanese okonomiyaki with takoyaki and yakisoba. Nick helped me finish mine off in addition to polishing his own off.

When we returned to the hotel, the staff had another surprise for us – another congratulations cake and a note congratulating “Mr and Mrs Soars” – so cute. The cake this time was a dark chocolate mousse cake – so yummy! 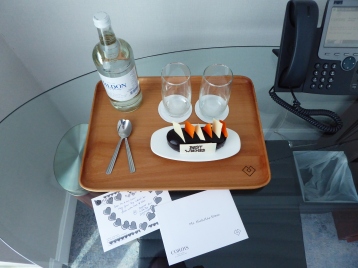 We headed up to the pool rooftop some time later.  Nick swum around a little and I just sat poolside.  Eventually we both fell asleep in the warm, humid air in the comfy poolside chairs.  This will probably happen again during this stay.

Once we headed back down to our room and refreshed ourselves we headed down to the “Garage Bar” – a hotel bar which has a couple of food truck set ups in their courtyard.  The ‘trucks’ are Citroen H Vans.  We had a couple of drinks and shared a “Kitchen Sink” hotdog and fries.  The hotdog was a spicy pork based sausage and pretty good.  After the hefty (late) lunch we didn’t feel like we needed a lot for dinner anyway.

We then headed out to check out the local area and found the Ladies Market.  Mostly it was all cheap knockoffs and junk but we had a short wonder around. 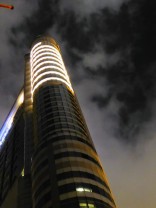 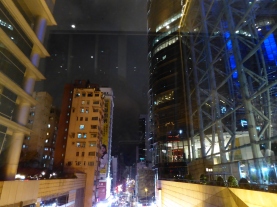 We then bought a couple of soft-serve ice-creams for dessert.  Nick had a vanilla ice-cream but I was more interested in the unusual lavender variety.  It was quite lovely, having a soft herbal taste. I really enjoyed it. 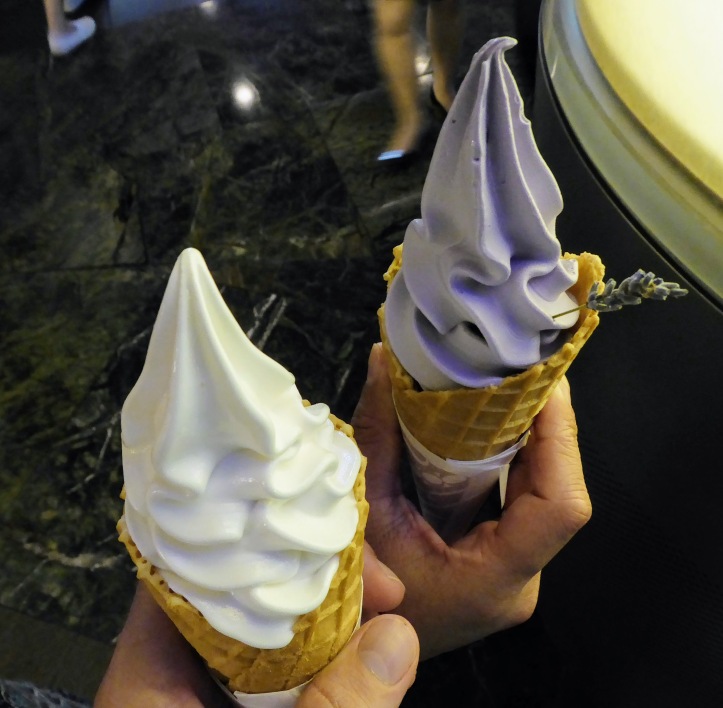 We headed back to the hotel shortly after to turn in for the night.  Tomorrow, we will go out and explore the wider Hong Kong area.  Stay tuned for more excitement!