So I’m a bit late to write this up… But better late then never!

River tracing (or trekking) is very popular in both Taiwan and Hong Kong, and involves trekking, climbing and swimming along a river.  Taiwan has an enormous mountain range which cuts the country in half, which has led to the formation of plenty of gorges and rivers – making Taiwan a great spot for this.

Unfortunately a lot of river tracing trips can be pretty lame – imagine spending a day walking down a completely flat river in ankle deep water.  There seemed to be two companies who offer a more ‘authentic’ experience – one of these was Shawa Canyoning, who I chose for this trip.  This particular trip was listed as “pros only”, but the dates worked so I figured I would give it a go!

The trek itself was along the Fone-Mei River in Miaoli County.  Unfortunately I couldn’t find much out about it from Google but I managed to take a picture of a map when I arrived:

While Carla slept in I had to jump out of bed at 5:30 in the morning, eat a quick breakfast and get to a nearby metro station for the pickup.  I was greeted by our guide – Sha, along with a canyoning ‘intern’ and another guide who was on holidays (but decided to go with us anyway for fun).

The intern – Allen – spoke great English and was telling me he wanted to go to Australia to work, and was deciding whether to pick berries in North Queensland or work in a bar/restaurant in a capital city.  I did my best to steer him towards the second option!

The drive ended up taking about 2 and a half hours, including a snack and smoke stop at a 7-11.  We drove through some spectacular mountains and I managed to get a couple of pictures on my phone (which unfortunately didn’t do it any justice!). 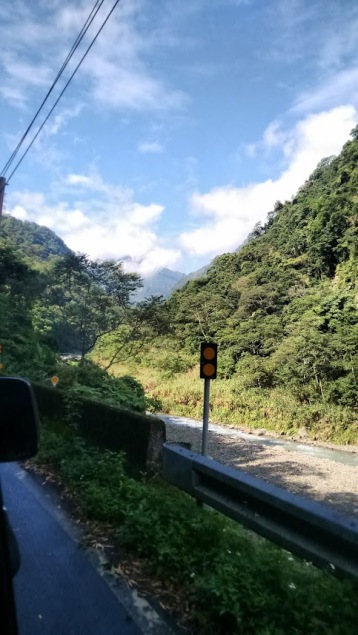 Upon arrival I met the other 4 people (2 couples) in our group.  They were Taiwanese locals and were on a road trip during the national holiday at the time.  They spoke varying levels of English but thankfully they were all awesome and very welcoming.

It was pretty clear that safety was taken seriously – we proceeded to deck ourselves out in a wetsuit, boots, helmets, gloves, harnesses with carabiner hooks and waterproof bags for our belongings.  I figured I could get by with just a bottle of water but felt pretty inadequate once I saw the 15 bags of various local snacks being carried by the others in our group 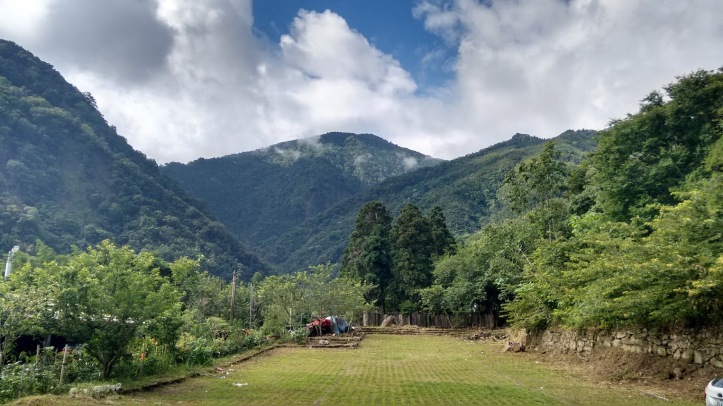 We had a quick safety briefing, which was delivered in Mandarin – so I figured my best bet was to let the others go first so I could copy them.  The weather was perfect, and the scenery reminded me of a Tomb Raider movie (a bit of a contrast to Facing Island).  The river was flowing down a gorge, with cliffs that had to be nearly 100m high in some parts with waterfalls scattered everywhere. 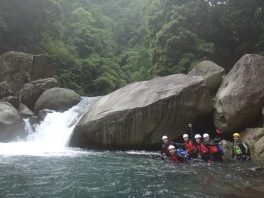 It was really challenging, even for the people with me who had done it before.  And it got even harder as the fog rolled in and it started raining – we were pretty thankful for our wetsuits as the water and rain were freezing.

The guides worked well together – while one was leading us, the others would take pictures and go further ahead to set up ropes (and remove them once we moved on), and when they worked out that myself and one of the other guys were up for a bit of a challenge they had fun making it a bit harder for us (by pulling up some of the guide ropes when it was our turn). 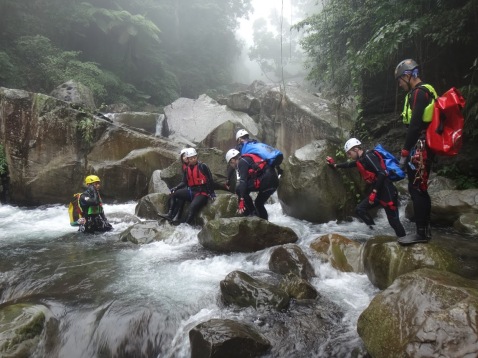 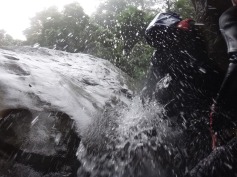 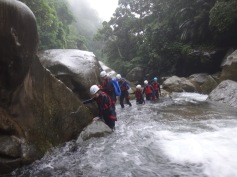 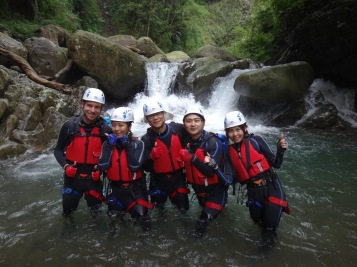 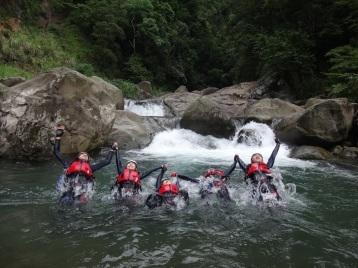 At around midday we stopped for a hot lunch – a pot of meat dumplings, enoki mushrooms and noodles in broth, followed by some honey sweetened tea.  I had a chat to the other two couples on our trip, who were all super friendly and gave me a whole bunch of tips on things I should do while in Taiwan.  As the trip was almost over by that point it was a bit late, but luckily we had done a couple of them already! 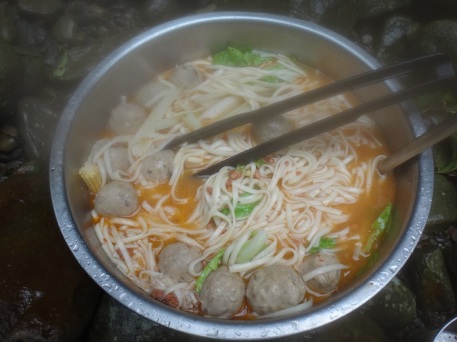 After several more hours of hiking, we arrived at the end of the trek – a 15-meter high waterfall.  We took some time to rest, swim around a bit and take a few selfies.

And after that, it was time to jump off it!  It did feel a lot higher in person than what it looks like in the video though 😦

Here’s the jump from another angle (not me):

We were pretty exhausted by this point, but we still had a 45 minute walk up the hill and out of the gorge, before we were able to get back to the car park.  The two pictures below were taken from the same spot in the morning and afternoon – the weather had definitely changed for the worse! 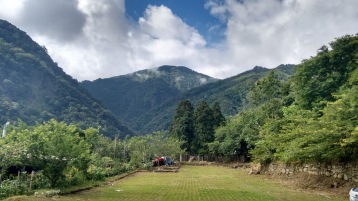 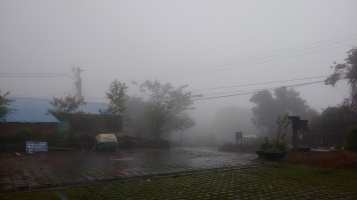 After changing back to our normal clothes and bidding farewell to the other couples (who had their own car) it was time to drive back.  Luckily the traffic was much better than expected and we made it back to the drop off point at around 7:30.

Overall it was a great day and a really awesome experience!