After yesterday’s success navigating the train system, Nick and I decided to tackle something a bit more ambitious today.  Making our way out to Shinjuku for breakfast and to explore the Gyoen National Gardens. A relatively late start, we were out of the house by 9am and heading towards the busiest train station in the world.

Now, you might know how challenging Nick and I find navigating.  To say that I could get lost inside a paper bag is, sadly, no exaggeration.  But Nick took on the role of navigator this morning and did an absolutely fantastic job! I would have been lost without him.  Very literally.

Our first stop out was Shinpachi Shokudo Shinjuku.  A traditional style cafe in the centre of Shinjuku.  The lighting was low and aside from the greeting call as Nick and I walked in from the streets, conversation was a sombre murmuring buzz.  It felt like a quiet oasis in the city and was very unassuming.   Happily, the food was sensational. 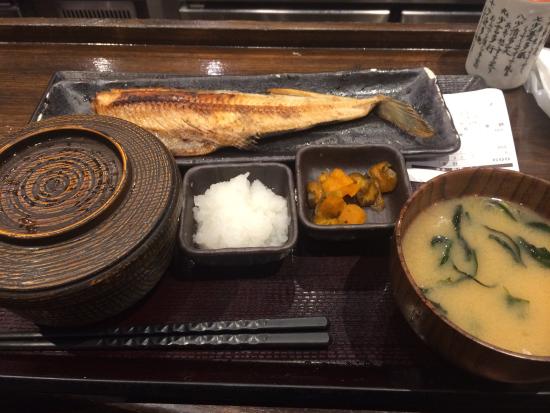 All sets were served with a bowl of rice, miso soup, pickled vegetable and grated daikon. Nick had mackerel for his main while I had pork which was cured in miso.  This was also an incredibly cheap meal, coming to about $20AUD for both of us. The fish was simple and grilled on charcoal while my pork came as a cutlet on a hotstone plate.  I was given kitchen scissors to cut the meat into easy to handle pieces.

It was a very small place, only seating maybe 15-20 people in a u-shape around a single server (there were other staff in the kitchen, making the meals). Very memorable and a great way to start the day.

Continuing on from there, we navigated past the strips towards the gardens.  It was very quiet still and the streets felt almost deserted.  This was around 10am and, as our host had mentioned to us last night, was probably a result of Golden Week which we are towards the end of.  Golden Week is (as the name suggests) a weeklong holiday period in Japan.  Many workers take the whole week off, or longer.  Luckily for us, this has translated to a quiet Tokyo experience as many people seem to have left the city to visit family elsewhere.

Entering the Gyoen National Gardens cost about $2AUD each.  We walked around the massive space, taking pictures and stretching our plane-cramped legs for the first time in days! The weather really turned on for us, with perfect blue skies and a cheerful warmth that sunk deep into my bones.  So relaxing!

We took some time for a couple of selfies. 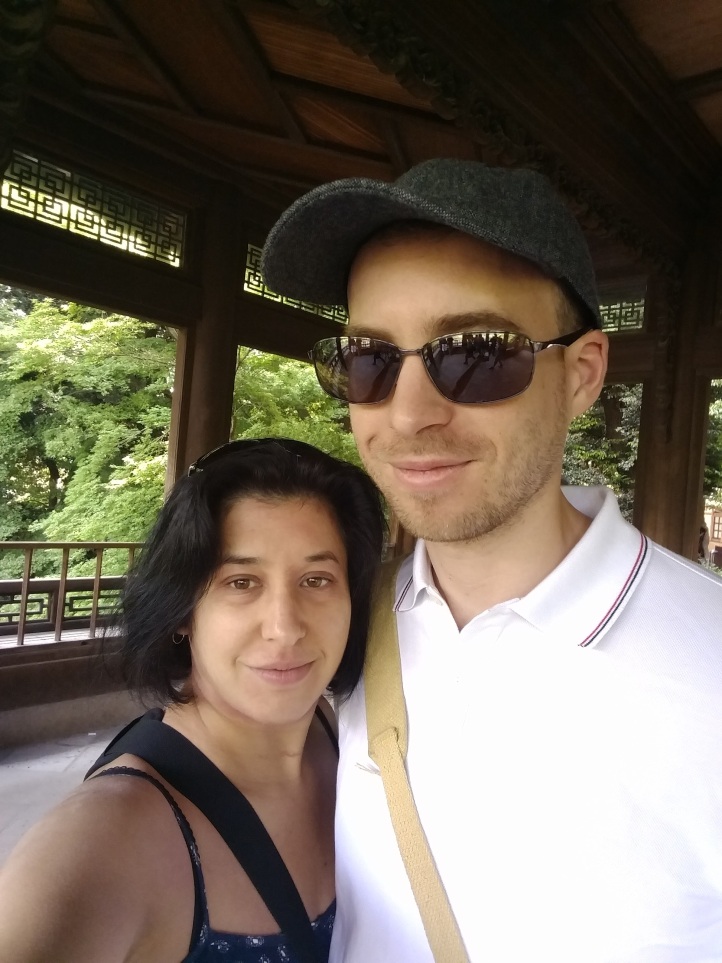 Finishing our stroll around the gardens, we decided to head back to homebase to recharge.  Along the way, we stopped for an iced coffee and a sit to rest our aching feet.

Taking a page from the Helen Soars Travel Guide, we had a bit of a nap when we got back to So’s pad.  Helen: I will never make fun of holiday nap time again.  It is divine. And exactly what we both needed as we are still a tad travel fatigued!

When we woke up, Nick headed out again to scope out a late lunch for us while I remained to hold down the fort.

The lunch that Nick hustled for us was a cold soba noodle salad, an onigiri to share and another of those white jelly desserts that I loved yesterday.  All this from 7-11 for the grand total of $6AUD.

Lunch over, we asked our host for recommendations for the evening and he directed us to the Shimokitazawa neighbourhood.

This turned out to be an excellent steer.  It took us about 30 minutes to walk there and it was a very pleasant journey.  There were many ‘izakaya’ dens which are closet sized bars which seat about 10 people.  Nick and I had a lot of fun perusing the area and after we stopped at one of these smaller joints for a couple of drinks, we decided to eat in the neighbourhood too.

Reprehensibly, we caved to an American style burger place.  The Japanese seem to be obsessed with them – so of course, we had to check it out too!  As a redeeming quality, the place we dined at, Village Vanguard was recommended specifically by our host so we decided just this once we would try non-local food.  I had a green lemon salad which turned out to be iceburg lettuce, olives and slices of lemon while Nick had a cheeseburger.  Nick DID let me have a few bites of his burger and I shared my salad with him too.  Balanced dining.

After this excessively healthy meal, we decided to top it off with a little dessert.  We tried a Japanese style crepe which was a crepe filled with sweetened whipped cream, chocolate sauce and strawberries.  Honestly, I think I will stick with La Petit Creperie in Melbourne from here on.  But it was an experience to try it!

Sated, a little tipsy and ready for bed, we decided to skip walking back and took the train instead.  We are becoming a bit better at understanding the train system and navigated the 2 train changes before getting back to Hatsudai station perfectly.

All up today, we walked over 20km so its a relief to be putting my feet up for the night.

Tomorrow we plan to visit the Imperial Palace so stay tuned for an update on that!  Hope to have more good photos for you all!