Picking up from my last post, Nick and I boarded the flight from Melbourne to Hong Kong without any issues.

Cathay Pacific Business Class was a really nice experience.  Probably the most comfortable seating I have ever had on a plane.  The seats reclined back completely which Nick took full advantage of for the couple of naps he took and the Audio/Visual set up was good.

As it was an early flight we didn’t get offered champagne on boarding.  Just as well, nothing says “alcoholic” like drinking before 9am. However, very early into the flight we were offered breakfast.

The appetisers consisted of bircher muesli, fruit salad and a choice of bread from the breadbasket.  Nick dived into croissants with jam while I was slightly more restrained with a wholegrain roll. Nick had the noodles for his main, while I had an omelette. 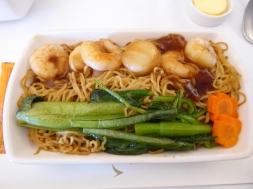 Lunch was even more amazing if you can believe that.  Especially given that they started serving the alcohol!  I had the scallop and prawn stir fry and an “oriental breeze” (despite what I just said, this one is a mocktail – I had a glass of Shiraz prior to this) 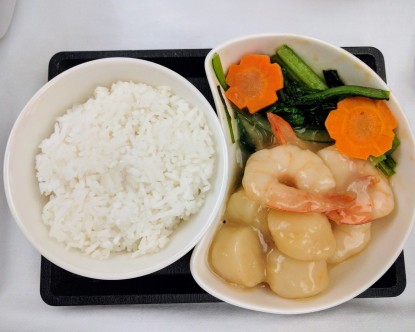 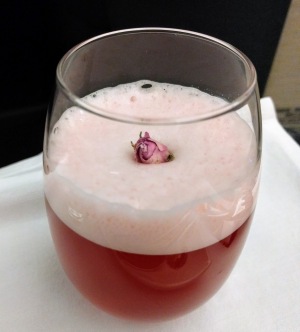 Nick had beef cheek which reportedly was excellent along with a beer, a champagne, a Shiraz and a glass of port.  Not too surprisingly, he took a loooong nap after lunch was over. There was also ice-cream and cheese plates with quince paste and crackers – after all this, I didn’t want to move!

Luckily, 9 hours of flight time meant that I didn’t really have anywhere to go and allowed for plenty of reading and movie watching.

Its a balmy 30 degrees here in Hong Kong and disembarking was smooth.  A couple of other visitors to the country got caught at immigration and sent to the back of the line again but not travel savvy Soars’.  We had arrival cards filled in before we lined up.

The Regal Hotel has been…interesting.  While the room itself is quite fine there is a…situation that I am not too keen on.

Yep…this.  A window from the bedroom to the shower and toilet.  I don’t even know what to say about this, but the look on my face probably speaks volumes.

The rest of the day was taken up with exploring the hotel.  Nick took a quick swim and I checked out the (kind of cool) herb and vegetable garden they have here in the hotel. Other then writing this post and getting ready for the flight tomorrow I am ready to drop as I didn’t sleep at all.  The bed here is MASSIVE so I am looking forward to falling into it.

Hope you’re all enjoying the journey so far.  We are!